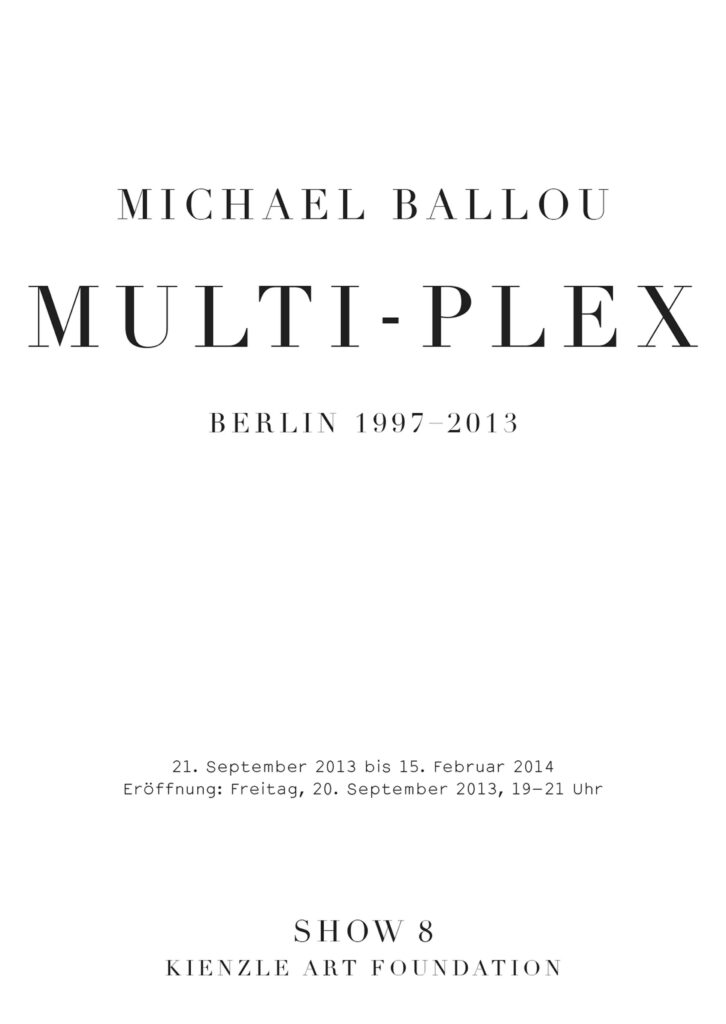 It rides on four wheels, needs to be looked at and listened to—but has no eyes or ears, lives forever in 90 minute intervals, and has three horns. When the sphinx questioned Oedipus, the query was about himself in a very circuitous and roundabout way, but the solution to Mike Ballou’s query: the synthesis of film and sculpture: results in a being much closer to the sphinx herself.

The re-creation of the Multiplex (originally 1997–99), is a creature born of a novel and practical resolution to a complex problem: like a classical monster, its attributes are formed through a process of accretion. There is one course of action that would make things simpler, faster and stronger, but an alternative that adds wings, arms and legs, and multiple heads; that is the solution that explores multiplicity. There are the visions—three monitors, each screening a different Super8 film, emerging from the three wooden horns. Merely projecting the films onto different walls would generate a cacophony of imagery and distraction. Instead, as Greg Volk has pointed out, Mike Ballou has generated three small personal theaters that allow the viewer to become totally encompassed by the filmic experience. The films flicker on and off in succession, politely making way for each other, one presents the main feature while the other two screen silent footage of the shadows of marathoners; an upside-down race.

The wheels: a sturdy shopping cart. In Mike Ballou’s pantheon of multi-use objects, a shopping cart is not just a conveyance of foodstuffs and home products but is also a storage unit, a table, and as in other installations, a stand-in for the artist himself—a tool for the making of art. In the belly of the cart live the three DVD players that are the brain of the piece, and also act as counterweight to the two monitors one on top of the other (a third rests on the floor) each screen with its own wooden viewing shed, aka horn.
There’s something very impatient and demanding about employing a horn to get your idea across. The honking of traffic, the bullying circus ringmaster with megaphone, or the grandiose affectation of the archaic gramophone, has an insistence that demands attention. There is also the reverse use—the horn as gatherer of information: the Holmdel Horn Antennae and Beethoven’s futile earpiece. And lastly there is just the primal symbolism, in the case of Mike Ballou’s Multiplex; what slow beast is this with body of cart and three horns?

In his recent exhibition (Spring 2013) at the Brooklyn Museum, part of the “Raw/Cooked” series, two installations cohabited with the viewer in their space, rather than staying put on pedestals or in cases. “Dog Years,” a collection of portraits of canine acquaintances of the artist spilled out from a display in the American Decorative Arts galleries, while the “Go-go room” presented a soundtrack and rotating mobile that flashed shadows across the walls of a gallery, no two shapes ever repeating: but while the viewer was transfixed by the sensory intensity of the installation, more often than not they didn’t notice they were walking on a carpet fashioned by Ballou, gilded in patches, spray-painted in others, a piece that subtly and intransigently forced the viewer’s collaboration in the work.

The gangly wooden shells of the Multiplex lurching into the gallery space have the same expediency and enthusiasm as the designs of Tatlin or El Lissitzky and their proclamatory art. The Constructivist aesthetic implied that the viewer didn’t have any alternative choice but looking. Sans politics, Mike Ballou’s menagerie of forms and strategies is similarly intrusive, but without the conviction of the zealot—once you are in his grasp, he gently persuades you that you are in fact looking in the right place at the right time.
Ballou has presented his films from many different approaches, he has woven them in and out of the lyrical mineral oil and pigment dreamscapes of Tony Martin during a lightshow at The Boiler (part of the Pierogi Gallery), and has shown them in an old-fashioned movie hall context at the Brooklyn Museum, with a live band led by Brian Dewan playing organ and dulcimer accompaniment to the action on the screen. The grainy flickering images of, among others, a man building a shelf with two puppet hands or a troupe of workers arduously installing a billboard (that, to the surprise of the filmmaker more than anybody, was for Jesus!) are edited in camera and are shot consistently from the beginning to the end of the reel. Ballou’s films, like this recreation of the Multiplex itself at the Kienzle Art Foundation, are a combination of spontaneity, luck and a perpetual readiness to exploit the miraculous in the seeming banal. Contained within these arbitrary parameters—the square footage of a gallery, the length of a roll of film, or the dimensions of a shopping cart— is an infinite space of jest and possibility. 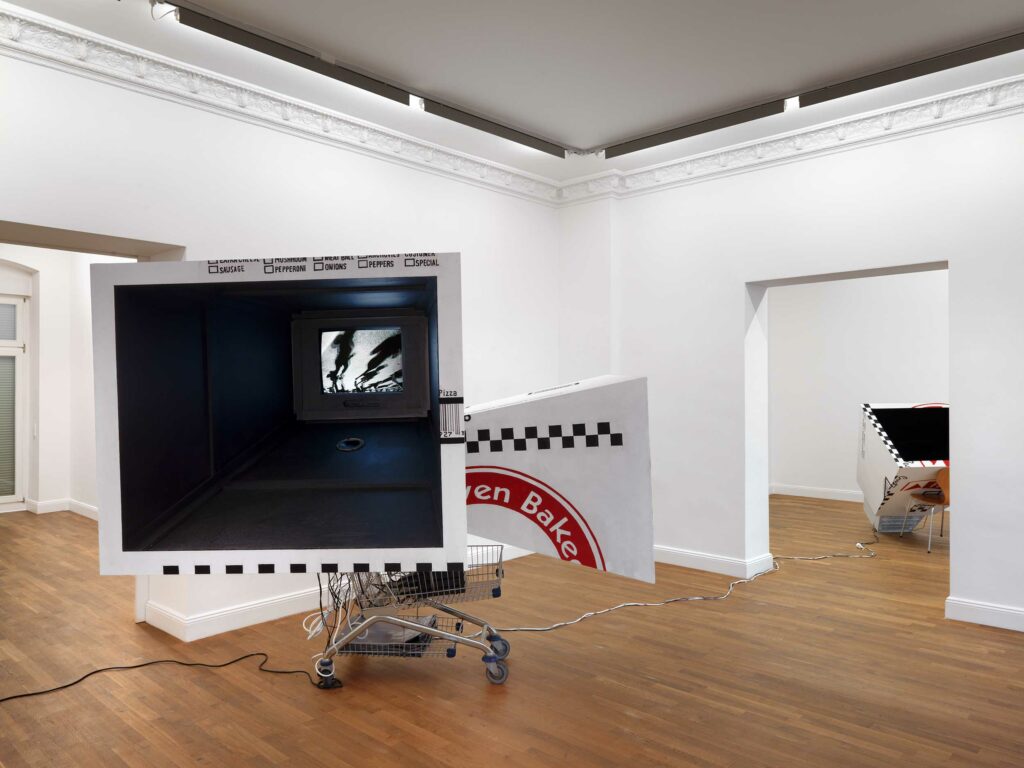 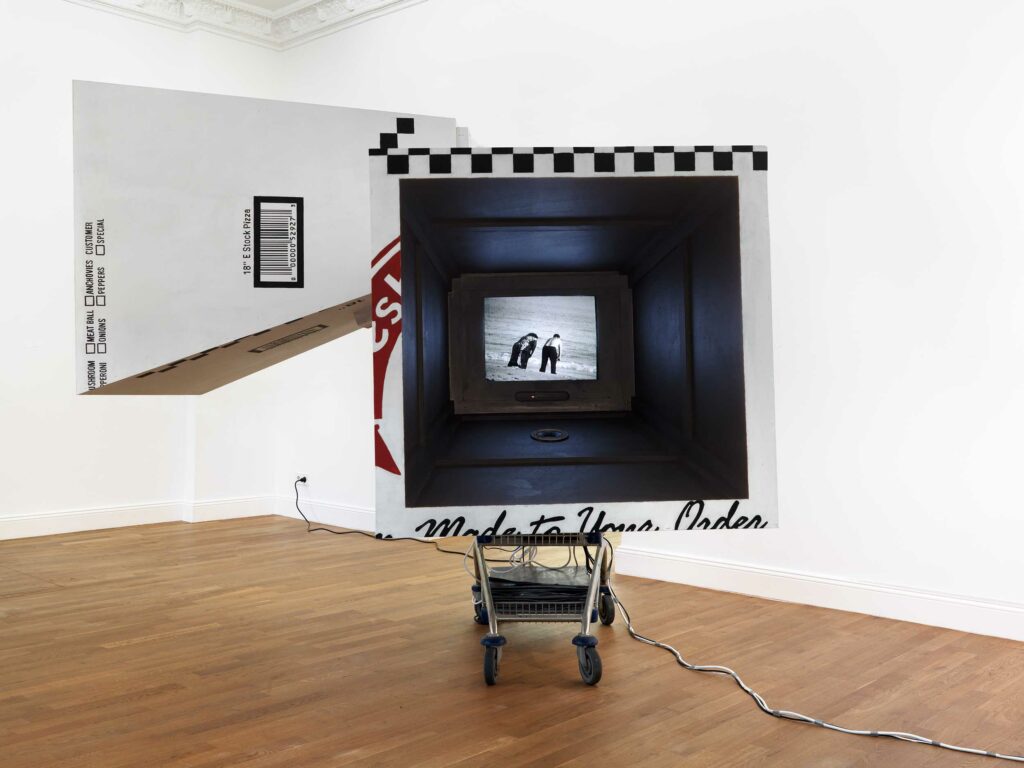 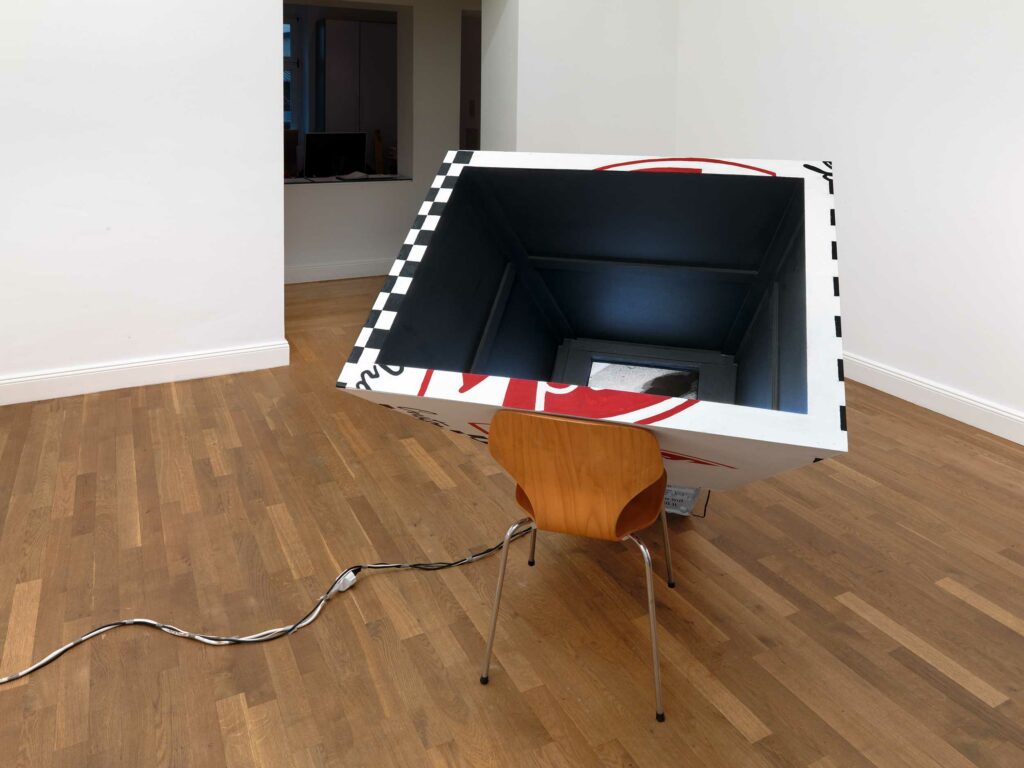 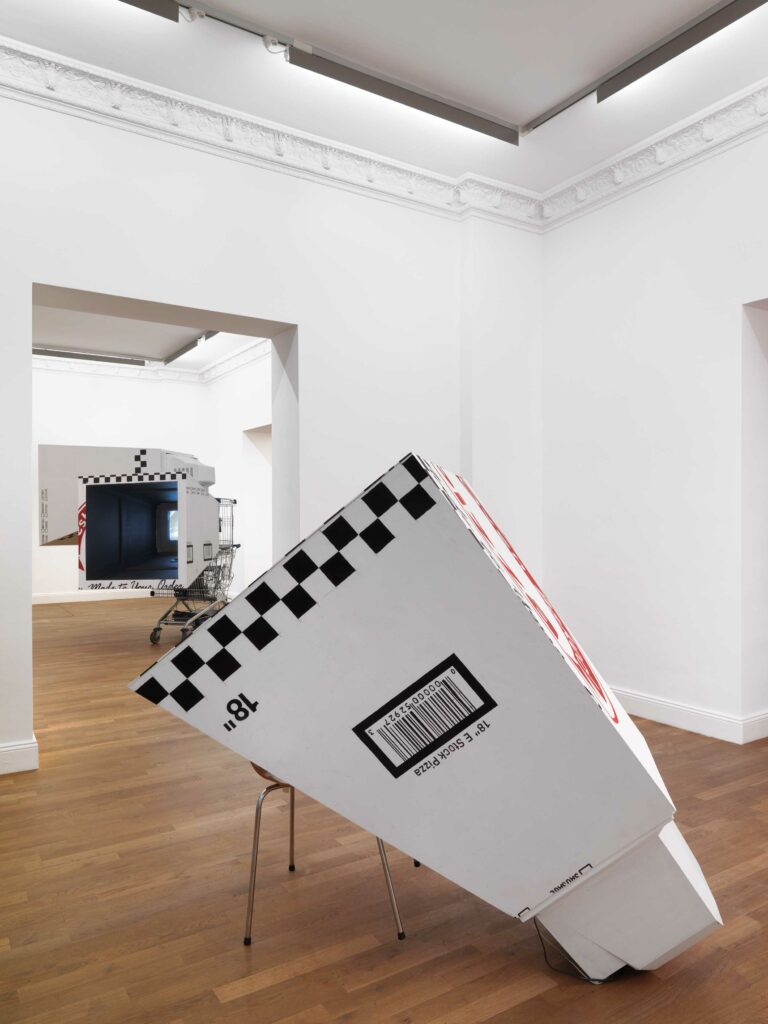