The artists in “Eins Svei Dry Cat” work the way the title does. A logical order is misspelled, reheard, translated and derailed by a fuzzy animal.

Nathan Baker takes a backward approach to making work, questioning the rules of procedure and subverting the intended use of his material. Sometimes this can be as literal as painting his images from behind. In his organza paintings the sheer material distances the painterly gesture and the revealed stretcher functions as drawing.

Sreshta Rit Premnath encourages and negates text in “EX/X”, a set of six photographic images that employ bleach. While bleach is usually used to erase a stain, here it is repurposed to create the image. X can indicate “here” or EX, “away” – a denotation or cancellation. Here the X is mirrored repeated left incomplete, as it shifts between absence and presence, between typeface and abstract image.

Aura Rosenberg’s photographs of animals in the Berlin Zoo were inspired by Walter Benjamin’s “Berlin Childhood”, a collection of short texts he began in 1932 after being forced into exile. One of these texts, “The Fishotter”, describes how the houses of animals in the Berlin Zoo reflect their country of origin, as though revealing something about their innate nature.

In Holly Zausner’s films the protagonist roams emptied city spaces alienated, almost oblivious yet sensuously connected. When Zausner returns to her New York studio the director and sculptor translates her film stock into prints and collages them into a wholly new syntax. The temporal, linear and transparent nature of film becomes flat, all over and all at once. The three collages in this show are from her Berlin film “Unseen” and take place in the Spreepark Plänterwald. It is as if she re-edits the film into a different medium. Because of her placement of the images, the grid, which is often seen as rigid, has the sensation of fleeting light.

Suzanne Joelson begins her pieces with a set of rules, arranging sheets of tyvek according to the golden mean. Patterns of heads seen from above or below mirror multiply and disintegrate in the process of their being made. Photographs and fabric camouflage and confuse the surfaces. The artist wonders about the people who moved into Le Corbusier’s housing development, disrupting his idealism with their all too human manifestations spilling out onto the balconies of the modern façade. The Fibonacci cycle has been used since the Acropolis for its inherent beauty. Joelson works in the understanding that perfect systems fail.

The artists in “Eins Svei Dry Cat” undermine authority in work that masquerades as orderly. Systems assemble and break down in a cycle of aggregation and dissolution. 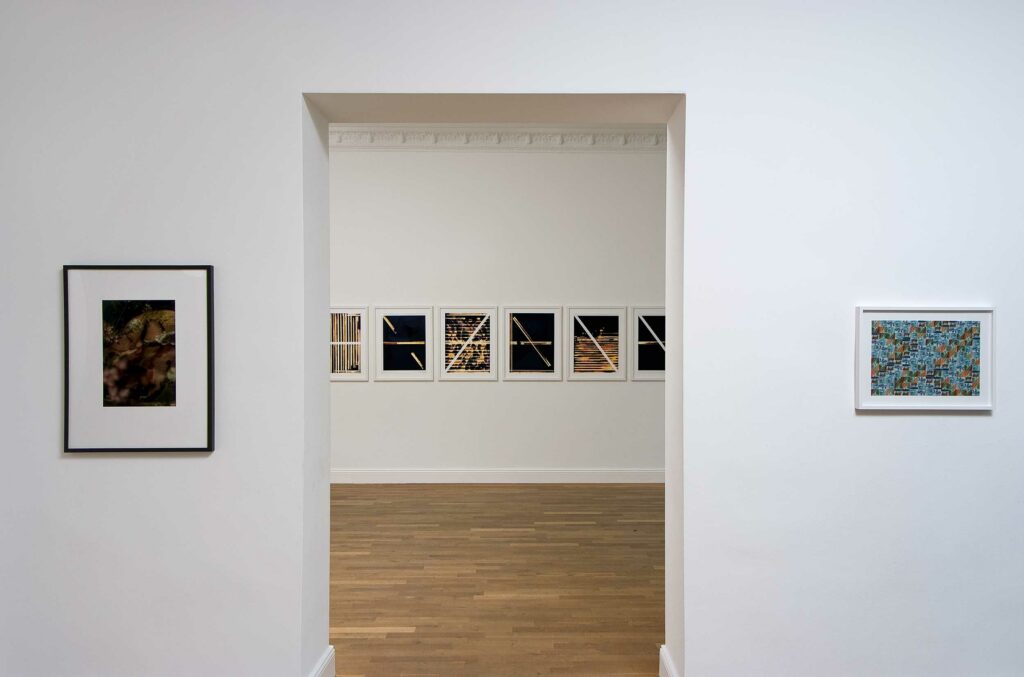 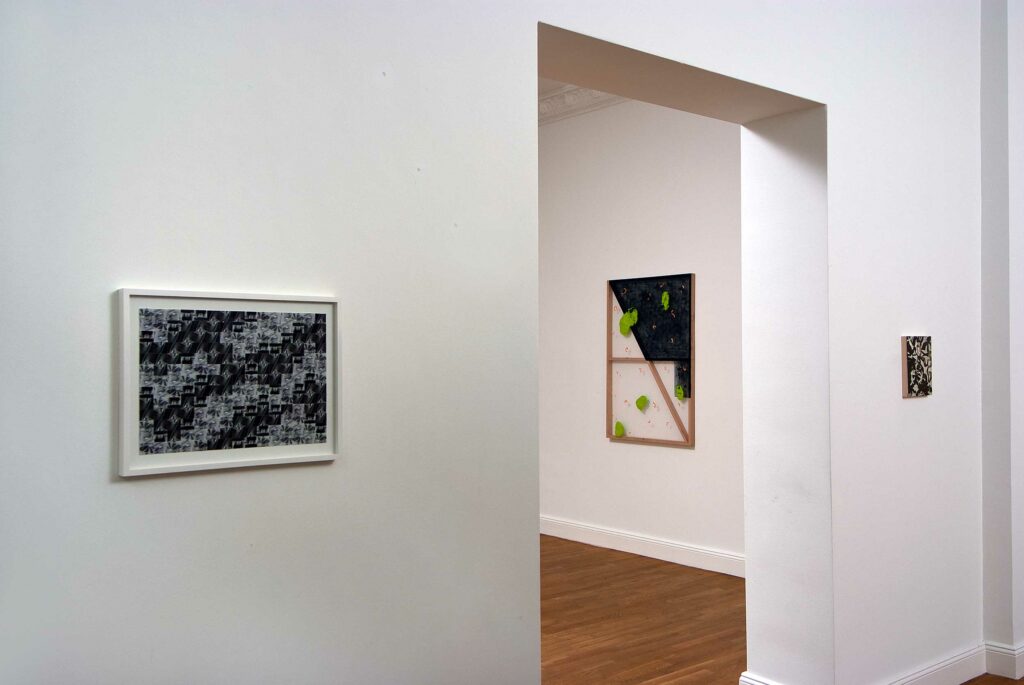 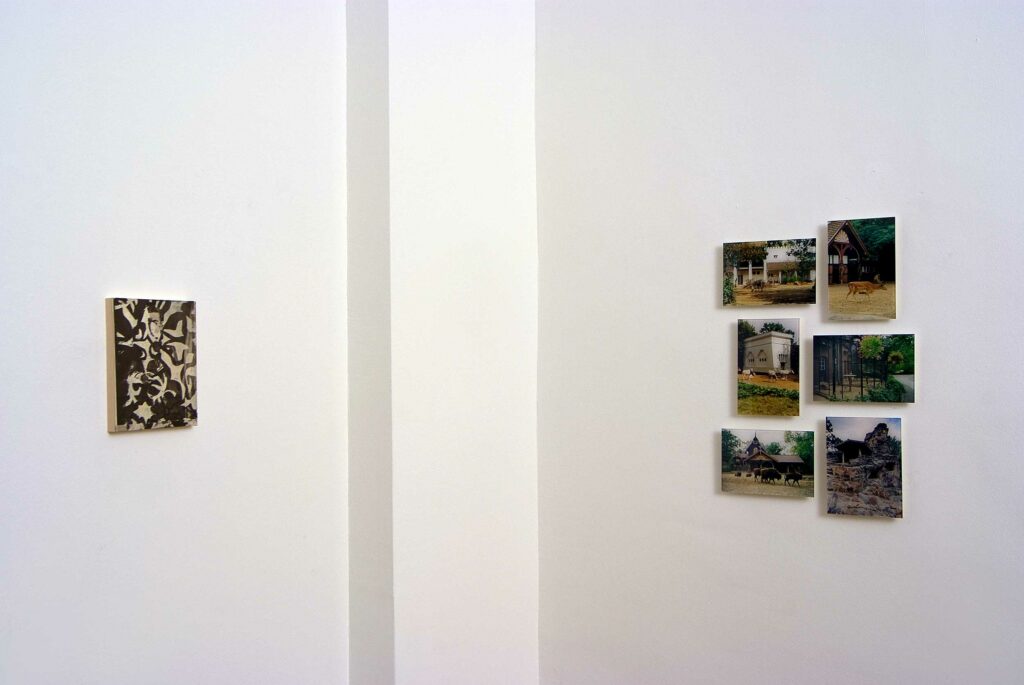 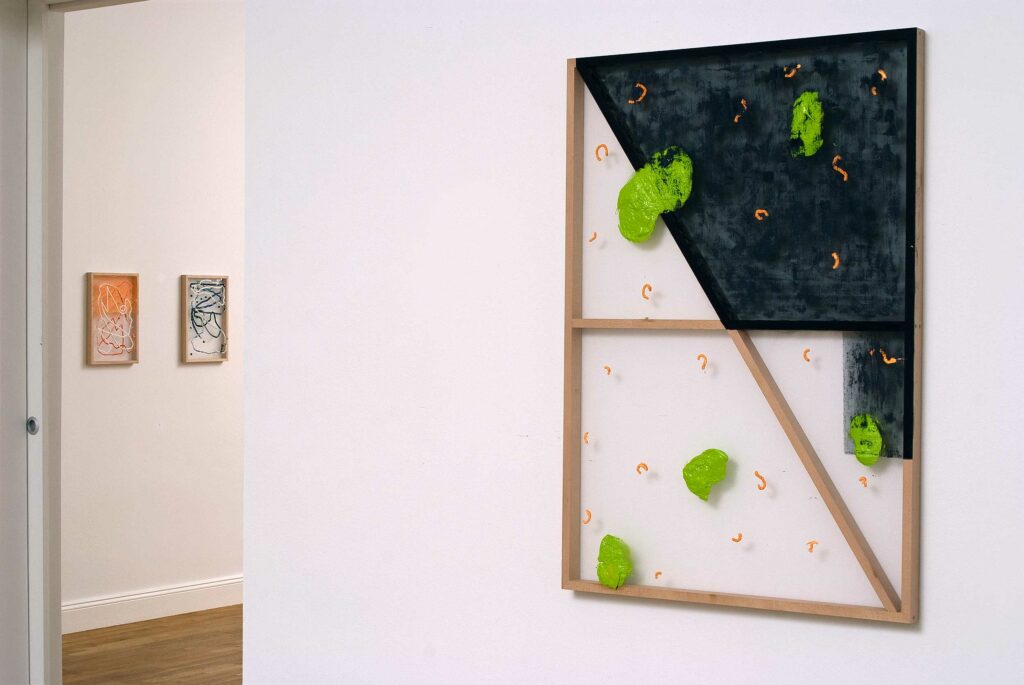 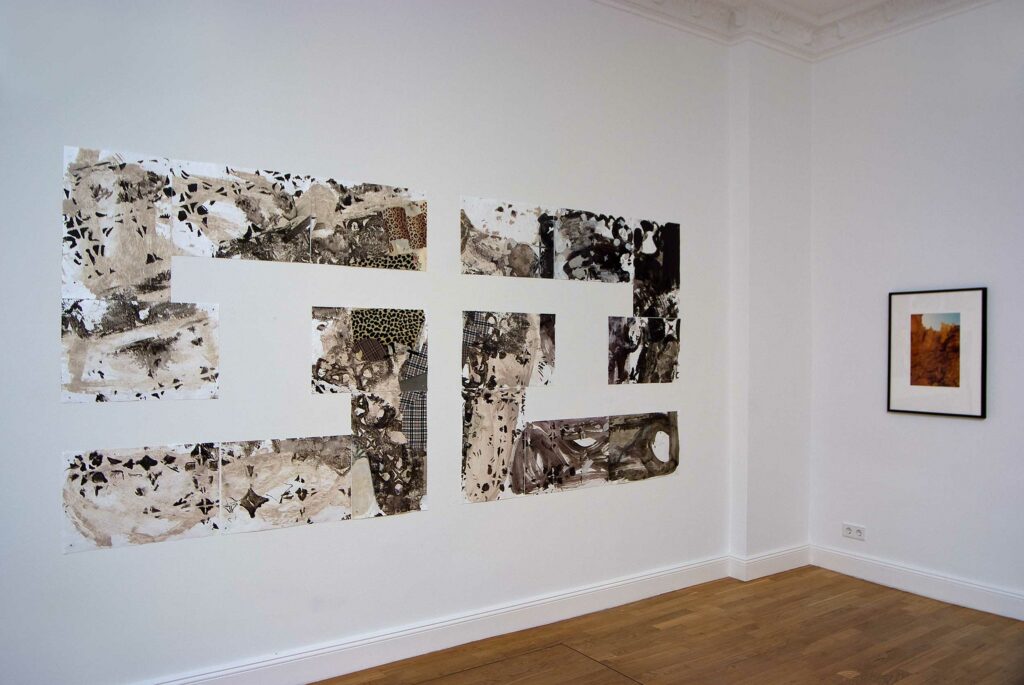 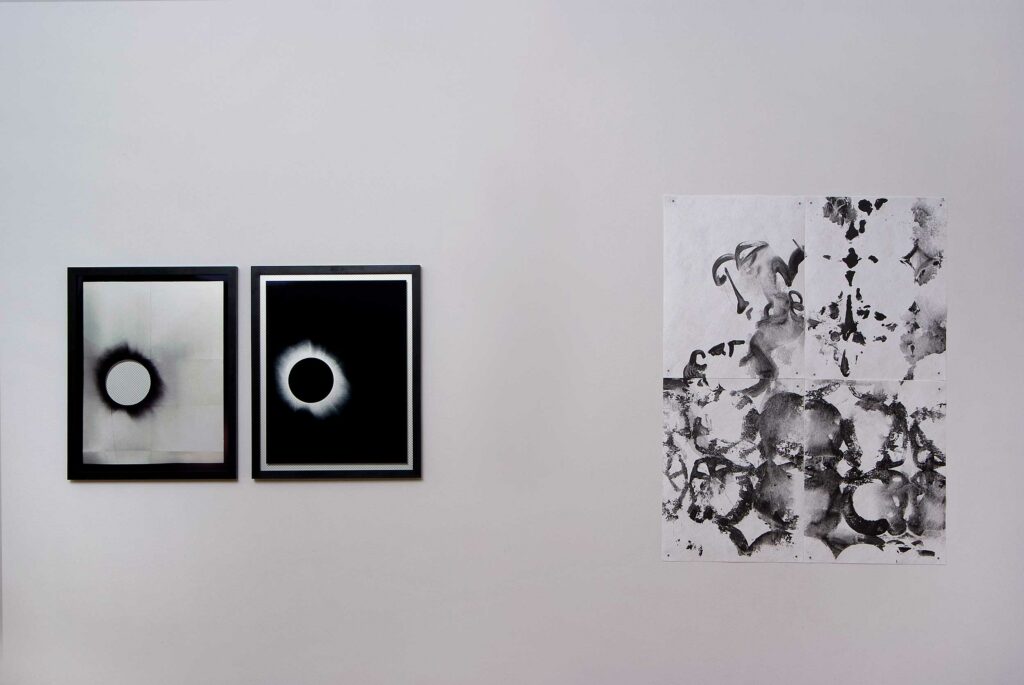 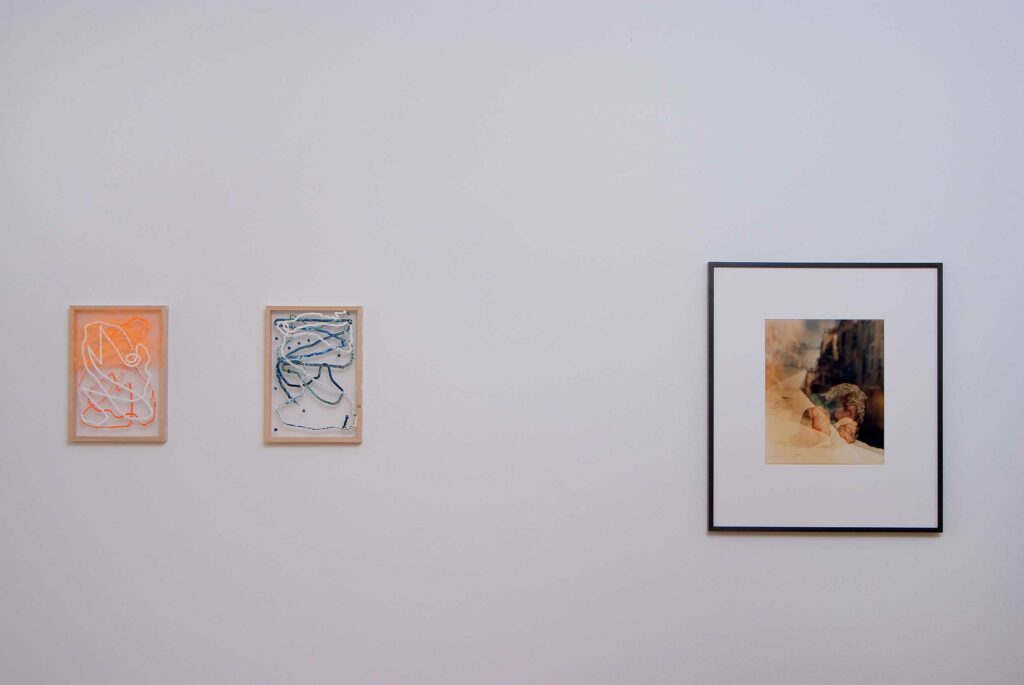 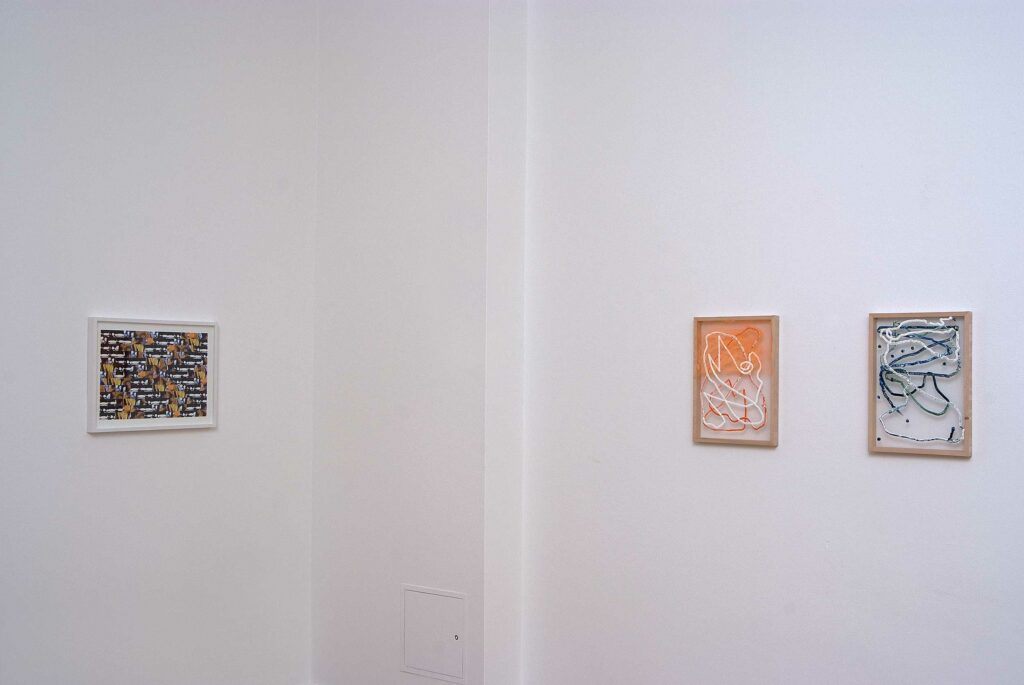 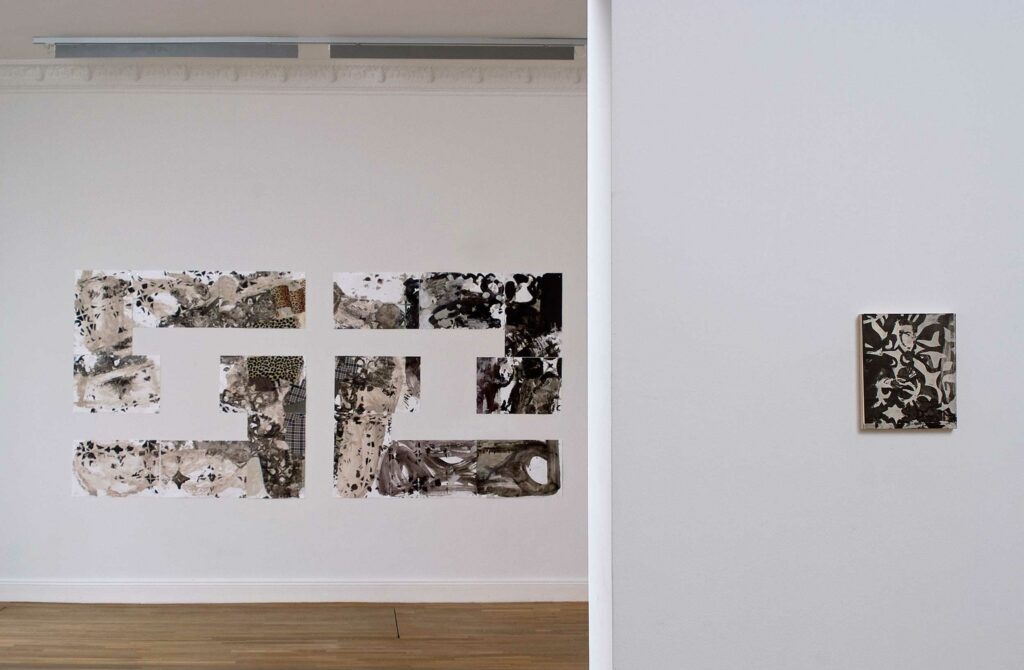 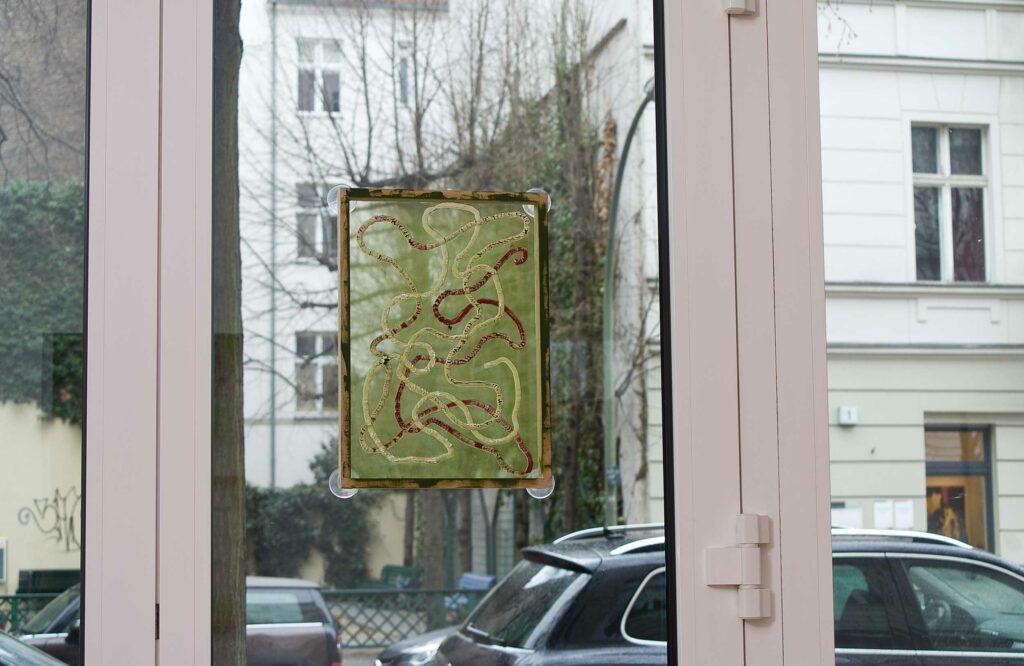