Galerie Kienzle & Gmeiner began the year 2008 exhibiting a solo show featuring Elmar Zimmermann. In the spotlight was a three piece sculpture that “throws up the question whether it is wave or a particle”. Flanked by “picturesque” constructions about circulating.

In summary, it’s possible to give a short description of his procedure through the material used: Everything discarded, without any value, used, tattered, recycled, fallen, incidental things etc., like old wood and furniture, blinds that are used and yellowed, shreds of polystyrene, oxidised metal, but also small model ships or cloths of painter colleagues, old calendars, paintings and sculptures. Very important elements are also mirrors and felt. More precisely: industrial felt made from shredded old clothes.

He finds things in tear-down buildings, in attics, in the cellar. On the road, in the bulk waste. At friends. In containers. At the flea market and in the “thrift store”. Even in his own studio. His processing: The “eye” separates the selected item from its environment. It is comprehended, held in the hand. Analysed: indeed, it is often divided into elements, cut up, and sawn up. The assembly of his works happens as a discrete incision, with scarce manipulations, which disclose potentials. The work is glued, stitched, screwed, painted, stretched, and combined. And finally defined in situations, precisely in form and appearance, as single units or arrangements, placed like installations. Retinal impulses transformed in cerebral barbed hooks. Speculative reconstructions from the perspective of an imaginary future.

In 2005, the art critic Hans-Jürgen Hafner wrote about Zimmermann’s first exhibition at Kienzle & Gmeiner entitled “Die Verfassung der Bilder / The Condition of the Pictures” that “the heterogeneous and the disparate, the hovering layers and fissures in paintings and objects, the installative fringed settings” “- appeared like if in the course of archaeological research in about three hundred years (counted from today on), a test arrangement by Buckminster Fuller was supposed to be reconstructed with the sad remains of a chicken farm following an (alleged) recipe of Robert Smithson’s “Collected Writings”. And thus, should be developed, what could possibly have been meant by art as construction at the beginning of the 21st century…”, referring to Elmar Zimmermann as “Retro-Futurist and Mineralogist”.

Elmar Zimmermann was born in 1976 and studied from 1997 until 2003 at the Art Academy of Karlsruhe and at the École Supérieure des Beaux Arts in Quimper. To date, he has shown his work in individual exhibitions such as
2007 | The Ice Age of Artistic Research, Galerie Ben Kaufmann, München
2006 | who present, past and future sees, by Bogner, Esslingen a. N.
2005 | Die Verfassung der Bilder/The Condition of the Paintings, Galerie Kienzle & Gmeiner, Berlin
2001 | Projektraum/Project Room, Galerie Gourmelen, Quimper (F)

He will also participate in a group exhibition at Galerie Kienzle & Gmeiner in March curated by Claudia Kugler. 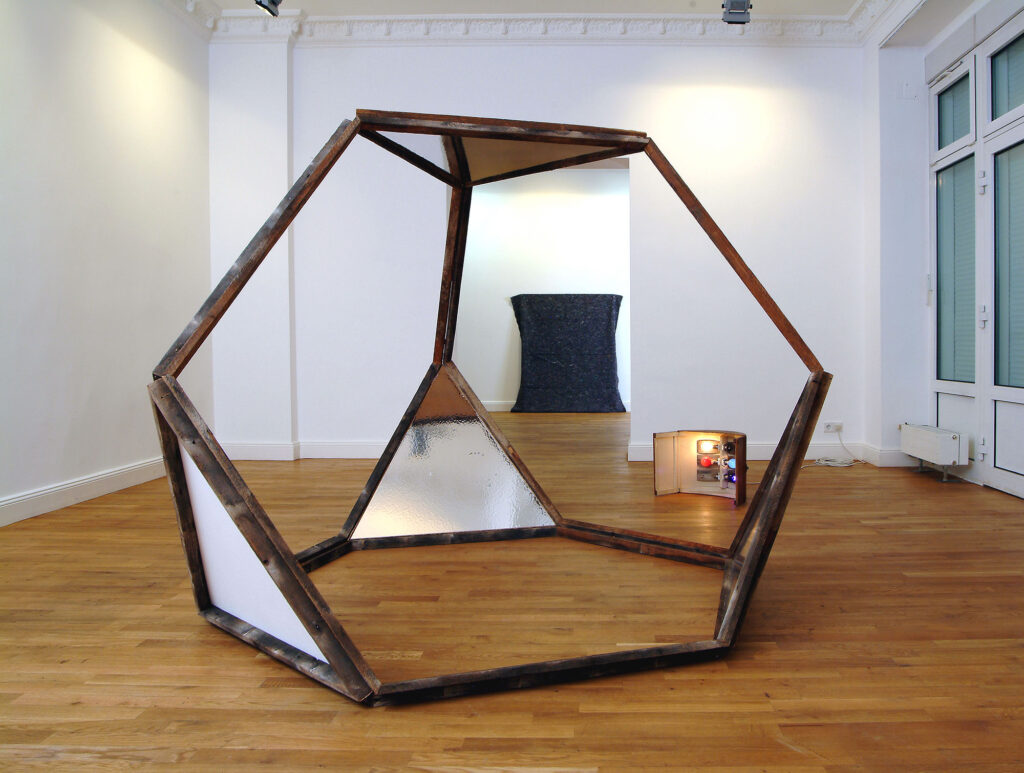 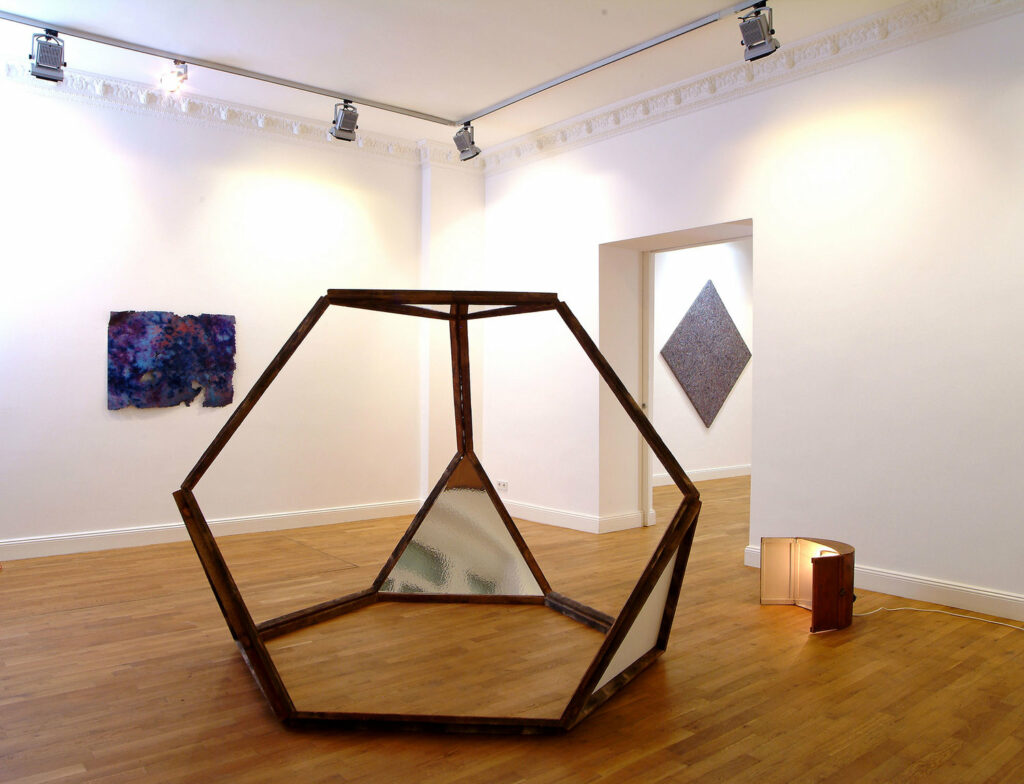 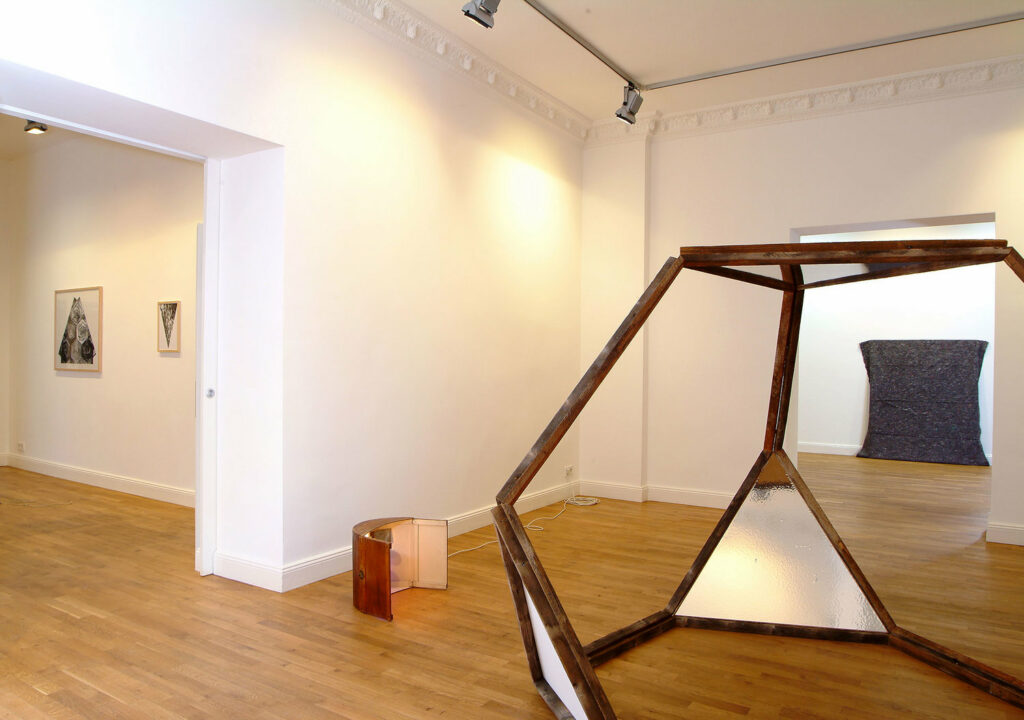