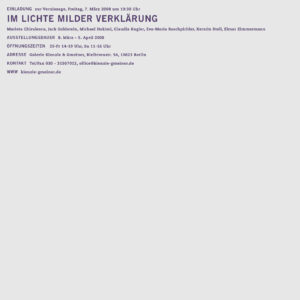 “To see is that sense of loss, of an appearing disappearance, that is always behind.”
Jack Goldstein

The picture of a knife projected as film. Extracted against blue background. The steel-like shining surface of a hard and sharp object, in its clear presence however completely impermeable, throws back a light pointed at it; it breaks on the polished metal. “The Knife” (1975) shows a knife as object for reflection; moves as a film without narration and images: both icon and allegory at the same time.

As exhibition itself a zone of the most varied demands and desires “In the light of mild romanticism” offers a space, in which pictures come together. The pictures finally find their respective forms, each in a very individual way, in terms of technique and medium and also concerning the artistic processing and the approached claim underlying the works; they take on their relevant shape. For instance in the lapidary form of digital prints or conventionally, as painting, as slide projection or as installed film, as an erratic “objet trouvé” or in a sculpture realised in complex work steps, they come together in the format of the exhibition.

As exhibition, “In the light of mild romanticism” offers a space for reflection about pictures. The group exhibition illuminates the space between the pictures, what they are and what they show, as well as the indissoluble distant relationship between the perception and its object. It proposes a discourse in pictures and understands them therefore as active figures. Figures, indeed, that don’t really “show” anything, but rather “are” in their very own way.

“In the light of mild romanticism” intends to remain discrete – but not in order to adopt a form that is d’accord with its surroundings and therefore readily in unison with it. The offering presented by the works in this exhibition is to make something visible in a mildly romanticising light, in fact, rendering it as attractive and effective at all and at the same time keeping it clearly reserved.

The current works of Marieta Chirulescu, Michael Hakimi, Claudia Kugler, Eva-Maria Raschpichler, Kerstin Stoll and Elmar Zimmermann set in correlation with the historical film installation of the American artist Jack Goldstein (1945-2003), not only unites their relevant artistic contention with image forms (made usable as and for art), the corresponding techniques, media and themes; moreover, they also approach each other through their debate with traditional ways of perception, the way they are linked to certain image forms, techniques and media, but also to thematic or iconographic patterns. Thereby is also of great interest that which is “there” as work and “visible”, as well as that, which still remains in the reserve.

The exhibition shown at Galerie Kienzle & Gmeiner, curated by the Berlin artists Claudia Kugler (born 1969), follows up to the group exhibition “Merry Go Round” about mechanisms and effects of repetition, staged in 2006 in the project space of Akademie Schloss Solitude, Stuttgart.

The exhibition “In the Light of Romanticism” deals with surface and perception; discusses both forms of visualization and reservations as well as denial.

When entering the gallery one immediately stands in front of a sculpture of ceramic made by Kersin Stoll (born 1968). Its title “Mercurius” insinuates a mythological side. An iridescent white-gold glaze encloses a coral-like form. Artistry meets the natural organic. Green breaks into thousand-fold shining sparkles.

Colour impulses, light refractions, flaring up flashes are also conveyed by the painting and the digital print of Marieta Chirulescu (born 1974). Surfaces are produced here in a way that they create the effect of the haptic, picture surface typified in such manner that the picture seemingly becomes motif and object. Such forms of media-crossing ingenuity, procedures like assembly and combination, depletion and concretisation, they form the general structure of the exhibition.

Claudia Kugler (born 1969) feeds elements of a photograph of a polished natural stone surface into a 3D programme. They supply, like the digital modules of the programme, design material for strangely credible picture encounters, which seem to show architectures and display spaces. The almost vital appearing, but still frozen seeming surface is reinforced through a thick covering layer of Plexiglas into an object and at the same time removed aloof as picture.

“To see is that sense of loss, of an appearing disappearance, that is always behind.” is one of the numerous aphorisms created by Jack Goldstein (1945-2003) between 1975 and 1985. And he throws light on his film work “The Knife” shown as installation. Here, the knife is in the sense of the word, an objection for reflection: a sharply outlined form against blue background, where the light breaks up in its metal surface. Just as on the one hand everything seems to be clearly at hand, when the camera focuses on its opposite counterpart, on the other, its nature manages to escape; that which we assume behind things.

Eva-Maria Raschpichler (born 1980) lets frail architectural as well as abstract seeming drawings and the bends in the leaves on which she drew work together in her slide projections. As if it were the most natural thing to combine both techniques, order and coincidence, the designed and the acquiescent.

The materials he found, Elmar Zimmermann sets into specific conditions, like here, with “Héritage”, where he fills an old barrel with the explosive force of a psychedelic inner life. New functions, foreign and one’s own history merge into another reality: built from ?pover? material, that is surrounded by a transfiguring and romanticising mantle.

Two works from a series of strange image findings, generated at the computer, are by Michael Hakimi (born 1968). They appear as large-scale format embodied, deliberately colourful computer prints and at the same time show, spatial order and forms in soft drawings and clearly defined outlines. Being virtual reality themselves, they show the observer images and open up spaces for him, whereby meaning, relation, sense can be construed in the first place. 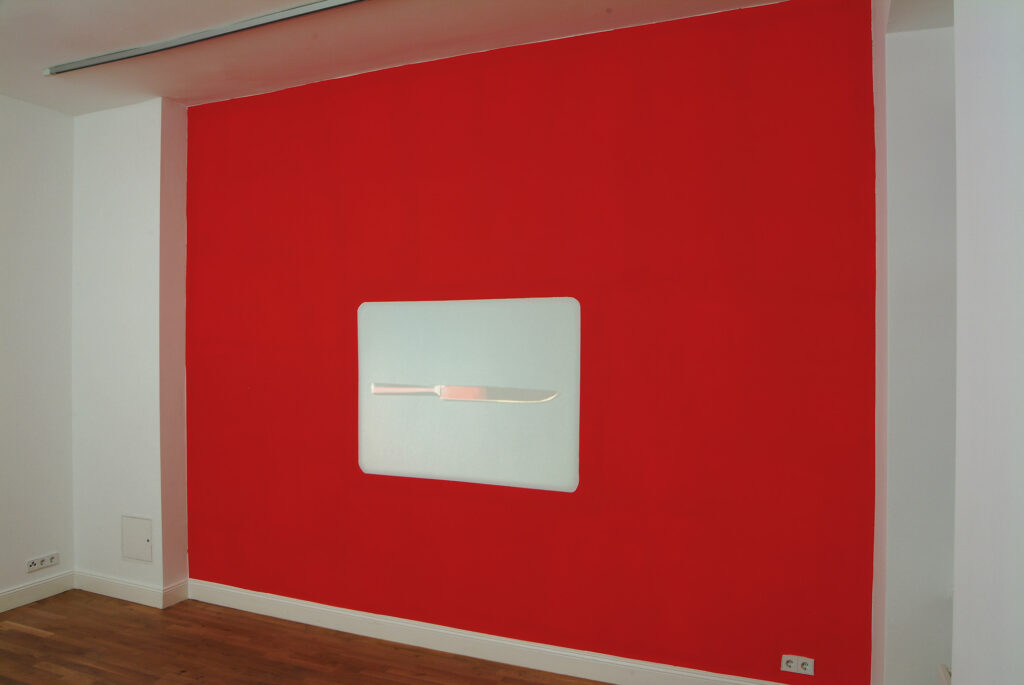 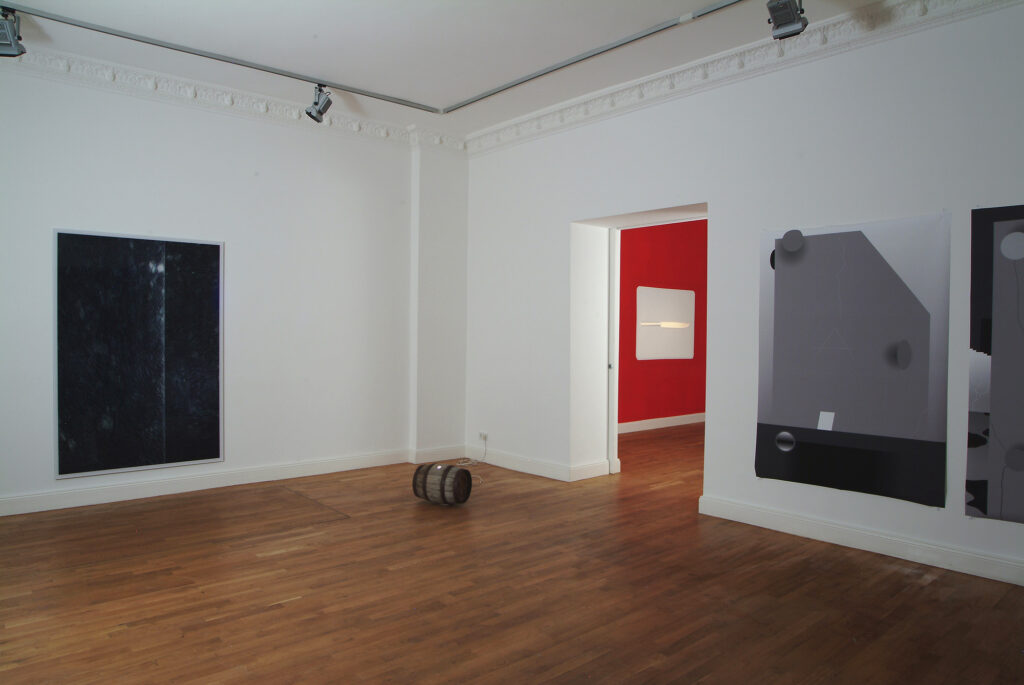 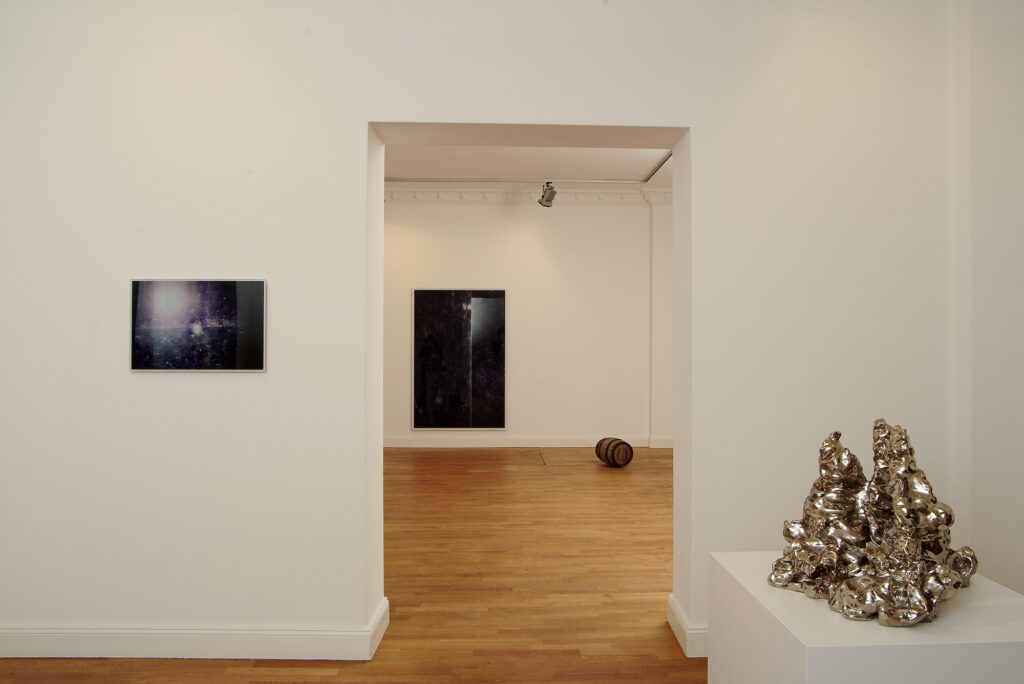 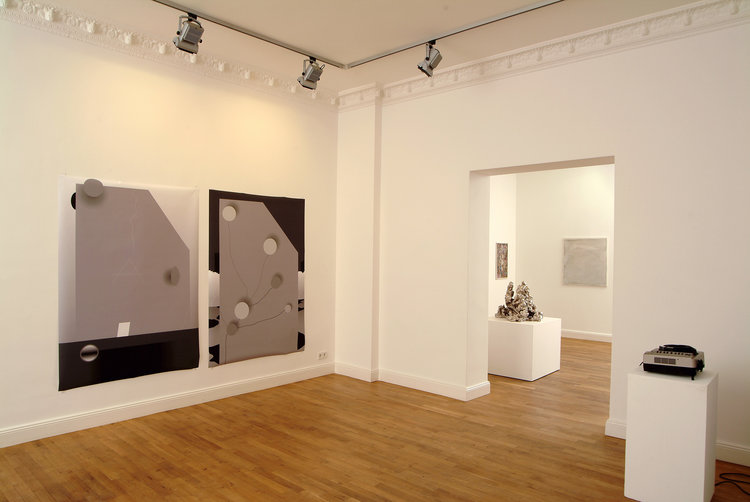 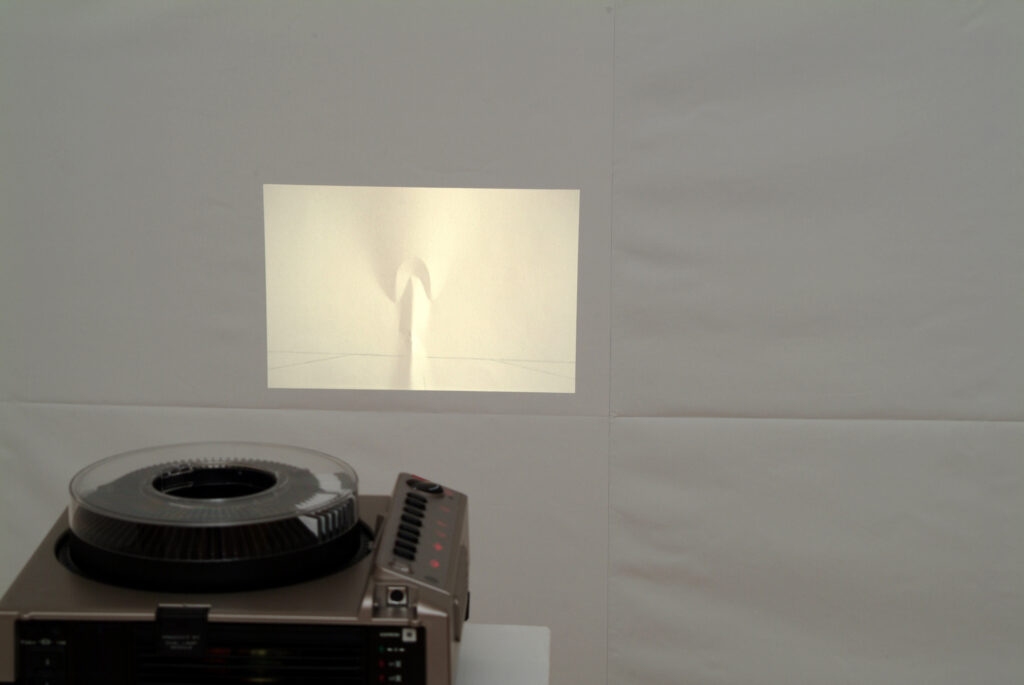 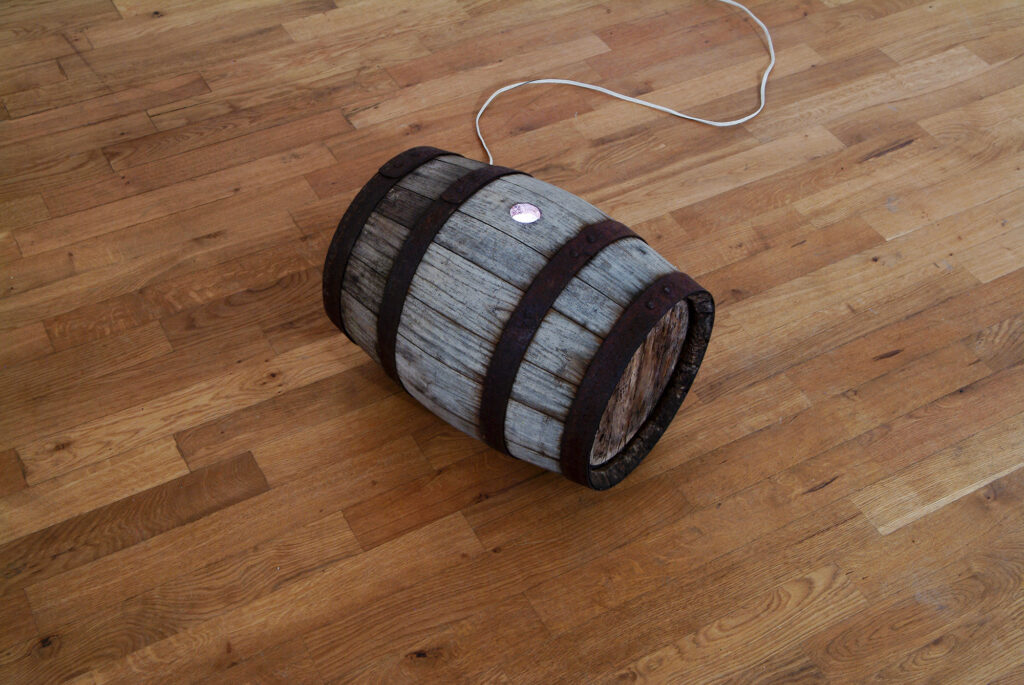 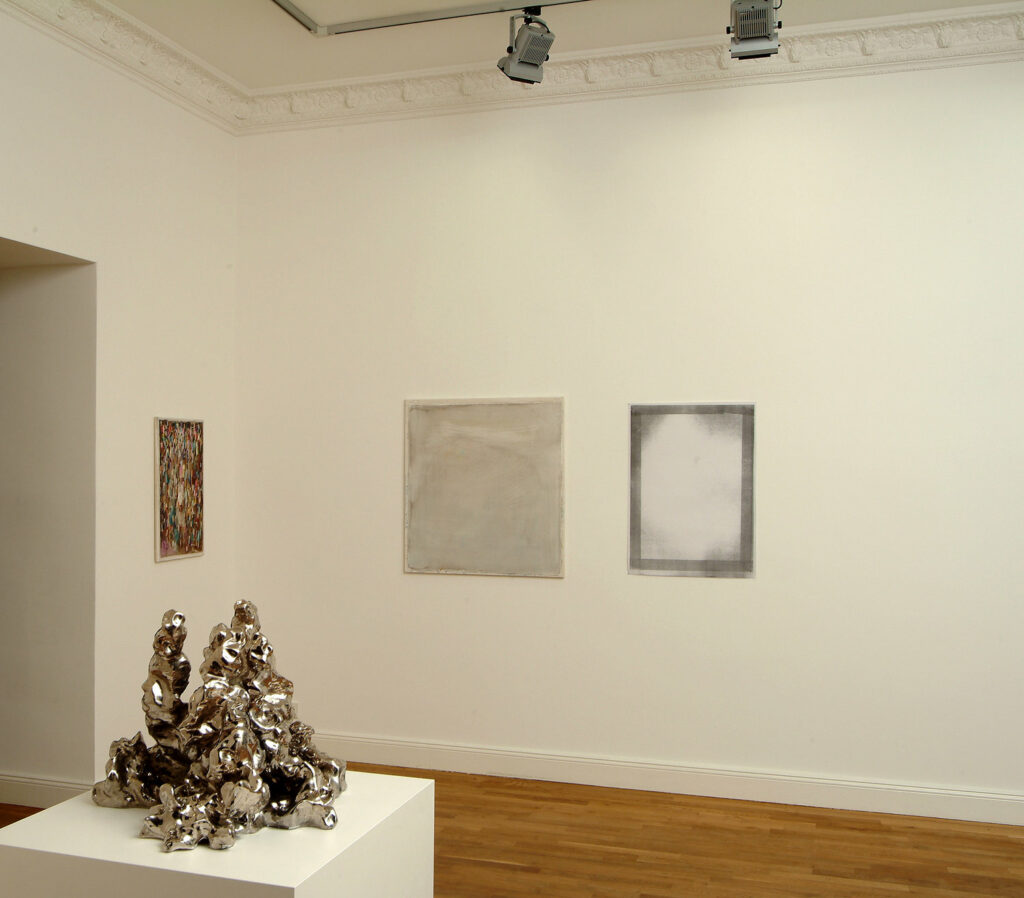