Tom Meacham sets the stage for the minimal with an image of excess. Dozens of small paintings stacked against the wall like loaves left in the front of a restaurant. The work, as if to be installed, invokes a sense of anticipation soon replaced by its inverse as the crosses on rectangles come to resemble headstones.  But the grays and blues of these modules are light ,clean and bright, fresh from the assembly line. As generic and as particular as cars in a lot or tablets of modern design. The T or + is sufficiently open, fresh, tired, familiar new. They offer the broken promises of modernism for re-negotiation.

A large painting extends beyond its wall so that its reverse side is exposed to our view.  From the onset we feel to be backstage at a show, examining the constructs that confer mystery. The gallery, which likes to render itself invisible as if in the service of the art, is here illuminated. Like Brecht revealing the tropes of theatre, Meacham gambles that we will welcome this occasion to look behind the systems of enchantment, in the belief that the objects can survive this stripping. Their value, their meaning is enhanced by the inquisitor’s bright light.

Le Corbusier claimed that “Customs stifle architecture.” Here nothing is taken for granted. There is no easy viewing, no escape. We take responsibility for our thoughts. Matisse’s armchair is nowhere in sight.

On cheap mass produced canvases Ts are spray painted like cars, toys and machine parts. They resemble dancers with arms extended preparing to bow. They are remote and then vulnerable. Because of their similarity we take particular pleasure in the nuances of distinction that reward our close attention, confirm our connoisseurship and affirm the faith that no two dancers, no two people, are alike. There are enough paintings to fill cemeteries or galleries or build houses. No two are the same.

There are glints of shine on some matte surfaces, dirty corners and holidays where the paint did not adhere. There are crazes in one , dimples in another. An edge may reveal drips or spray. Like people, they seem anonymous or cartoonish until familiarity warms you to their inconsistencies.  A gray and white one with a broken side bar stands out like Tiny Tim, another T name, in Dickens’ Christmas Carol. The cross paintings began when Tom’s father, after whom he was named, passed away in a Catholic hospital, an intimate lesson in ways things change. Did the artist adjust to this loss by doing the most constant set of his career. When the rug is pulled out from under, one solution is to mess with the walls.

The T+ functions as sign and as a way to measure the canvas’ height and width and divide it into parts, into chambers. They are minimal icons often associated with significant form. One way to test the essentialist veracity of a painting might be to see what people in disparate cultures do with them. A Rothko left in the desert might be best used as tent material. Is it still a painting or is it shelter? Meacham stacks paintings into a house of cards and invites us to question their function.

It is the shape of a Roman torture instrument that became a symbol of deliverance and the floor plan of a church., an early misuse of a symbol of domination in order to claim its power. Here the cross was borrowed from Corbusier, the instigator of the clean well lit space, that this artists abuses in his need to reveal its working and undermine its authority.

Children’s play often extends the use of an object beyond its manufacturer’s intention. In play we undermine the authority of convention to adjust to a transitional world beyond our influence. D.W. Winnicott claims that adults replace transitional objects and play with culture and religion. In toying with the intended uses of the gallery’s architecture Tom defuses a world he cannot control. In repetition Meacham engages constance and change. The denied aura leaves a brighter halo. 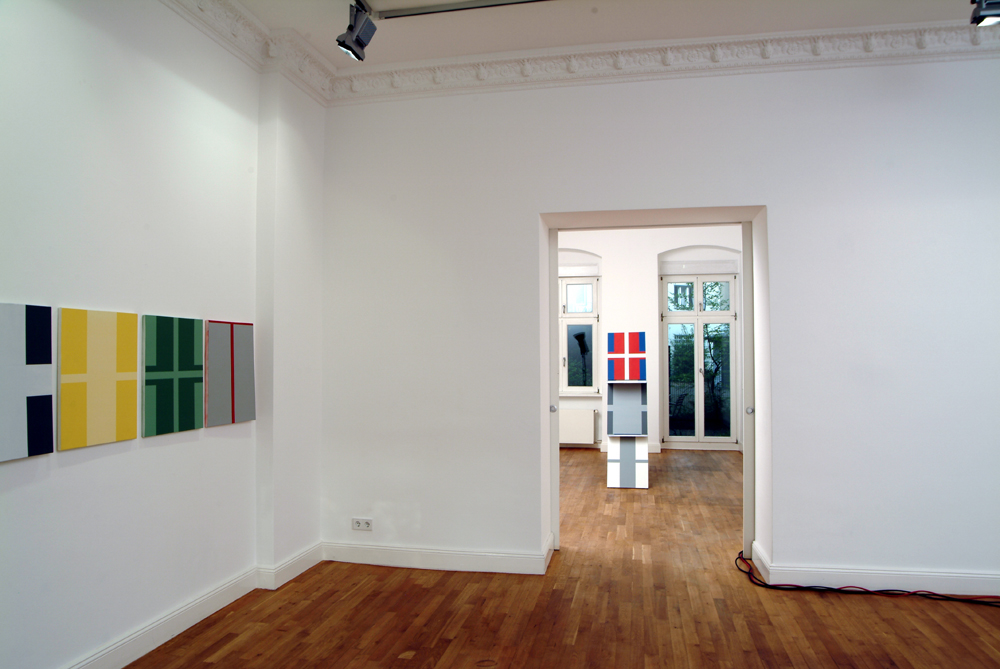 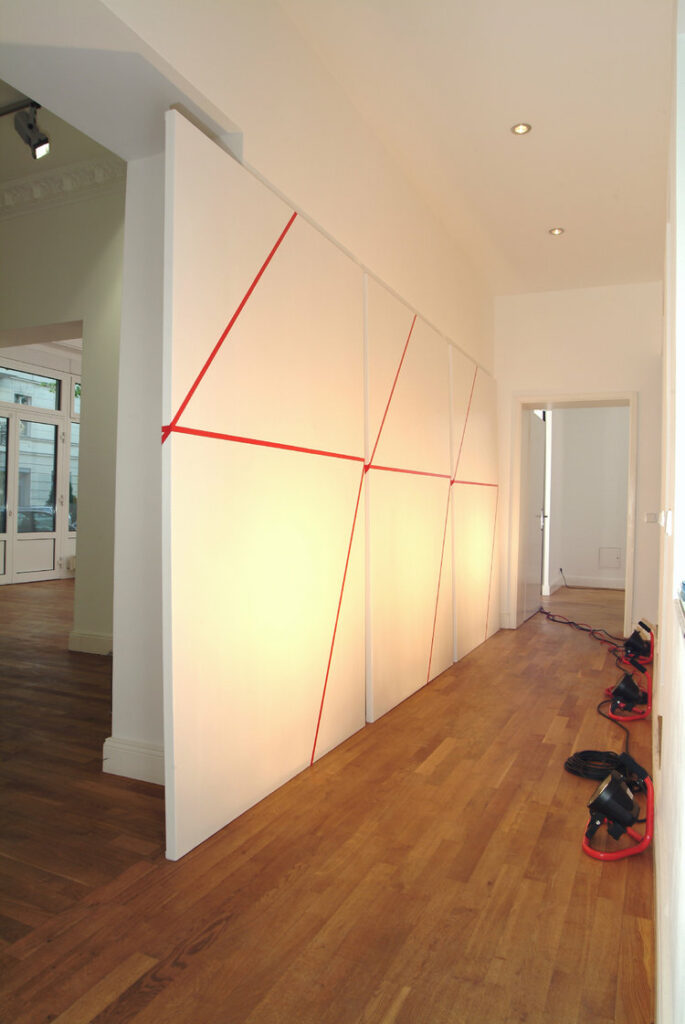 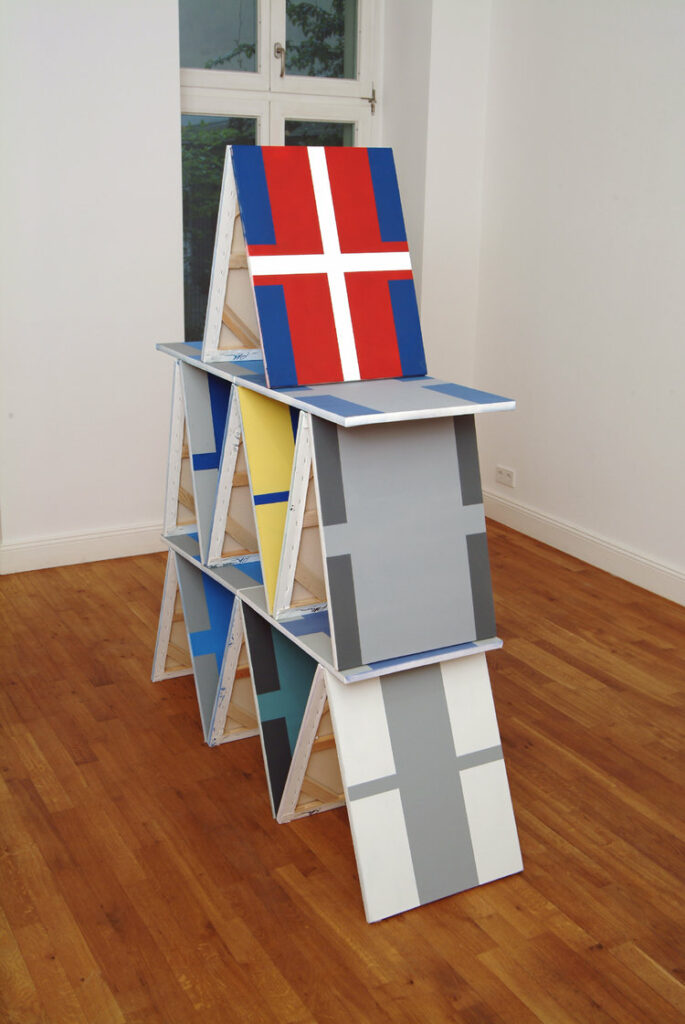 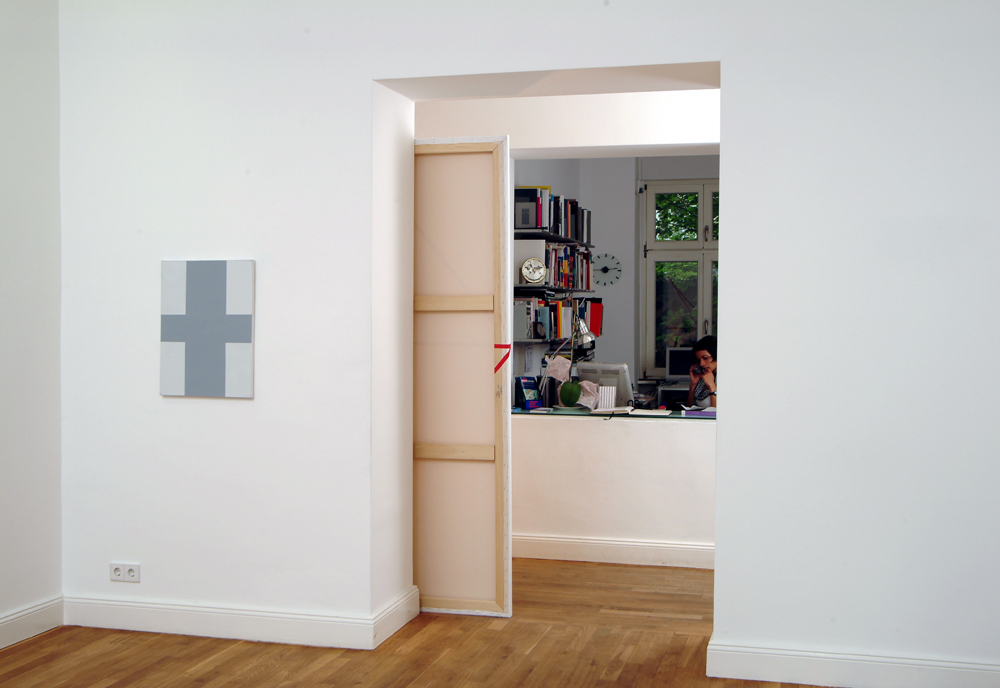 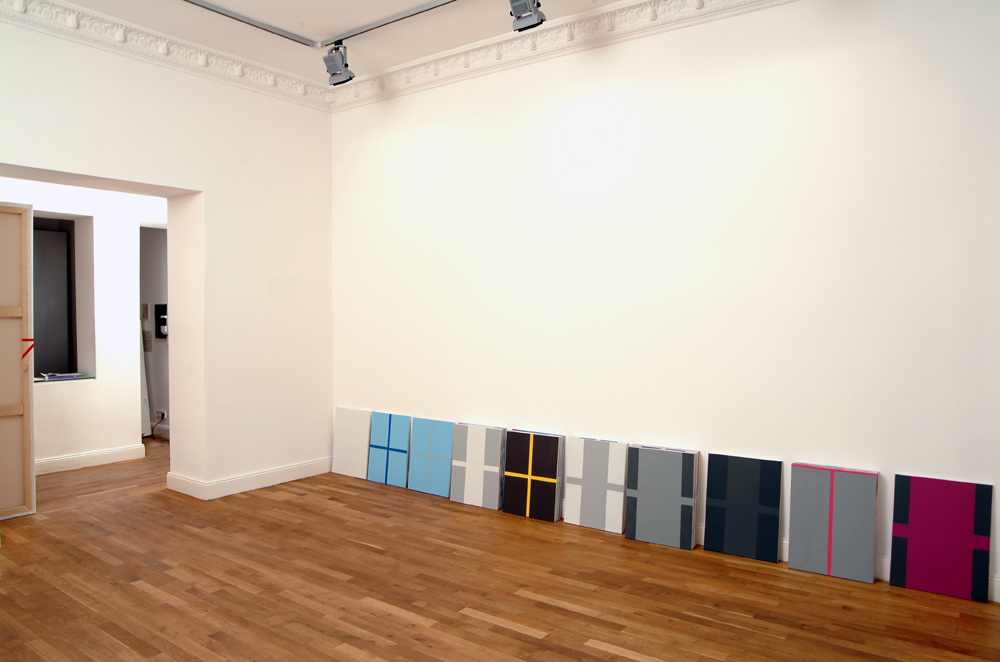 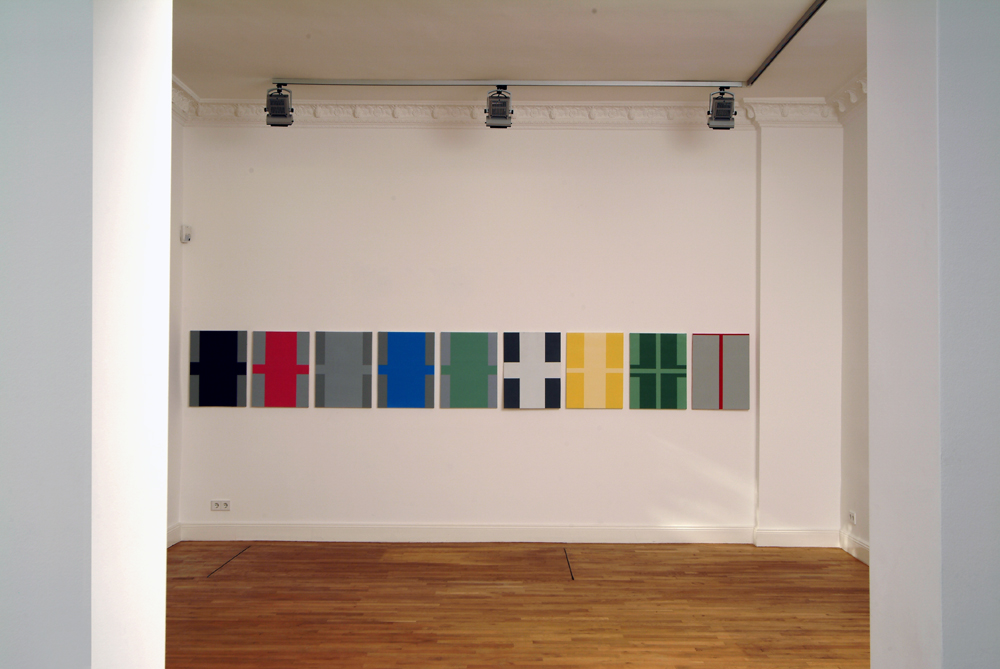 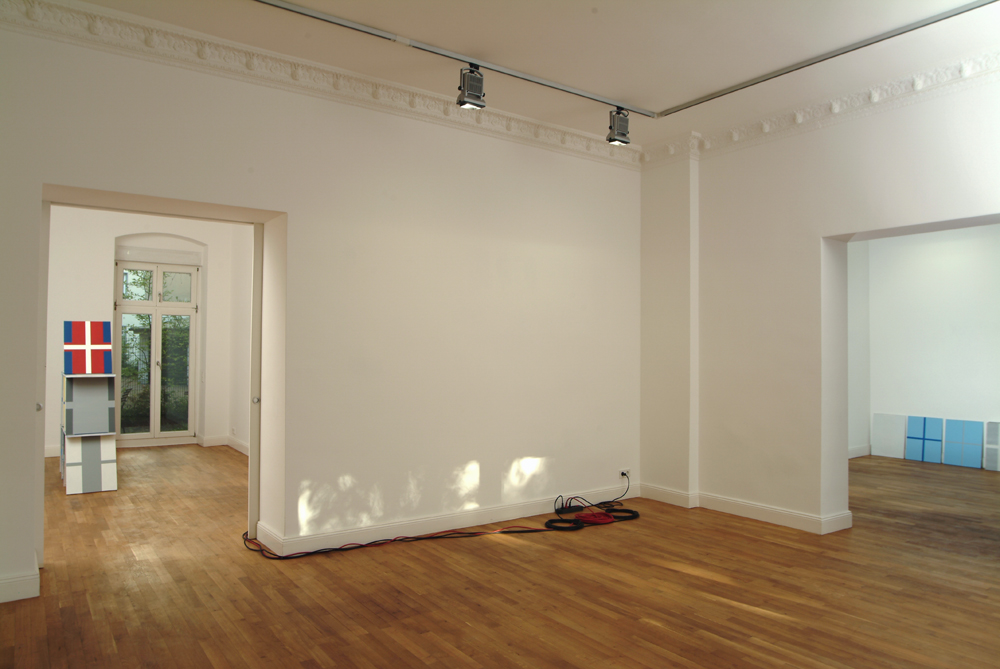 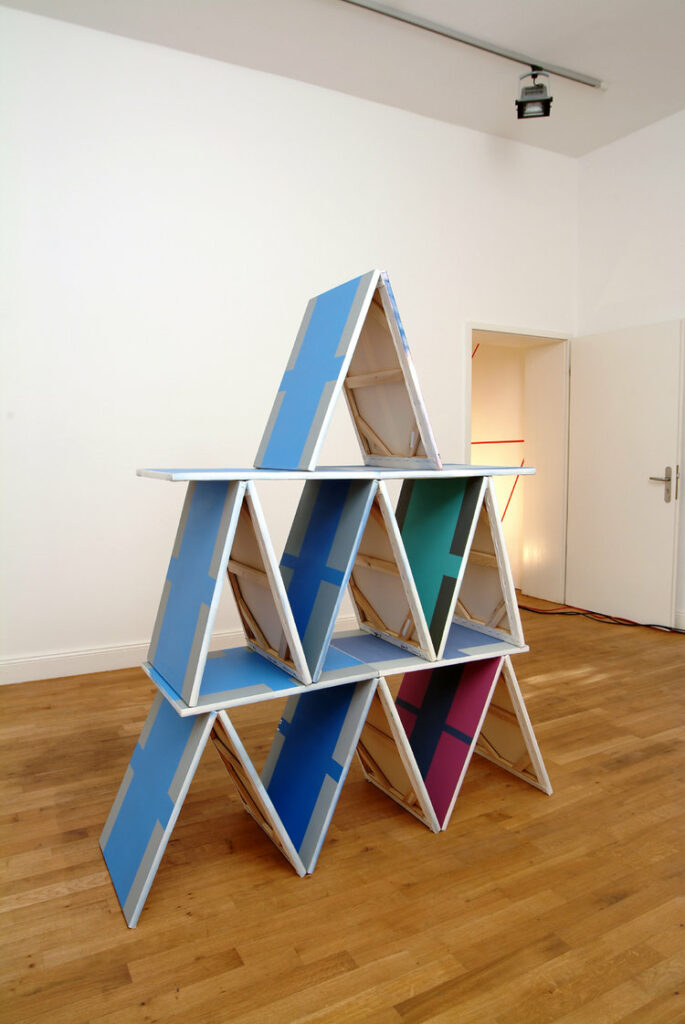 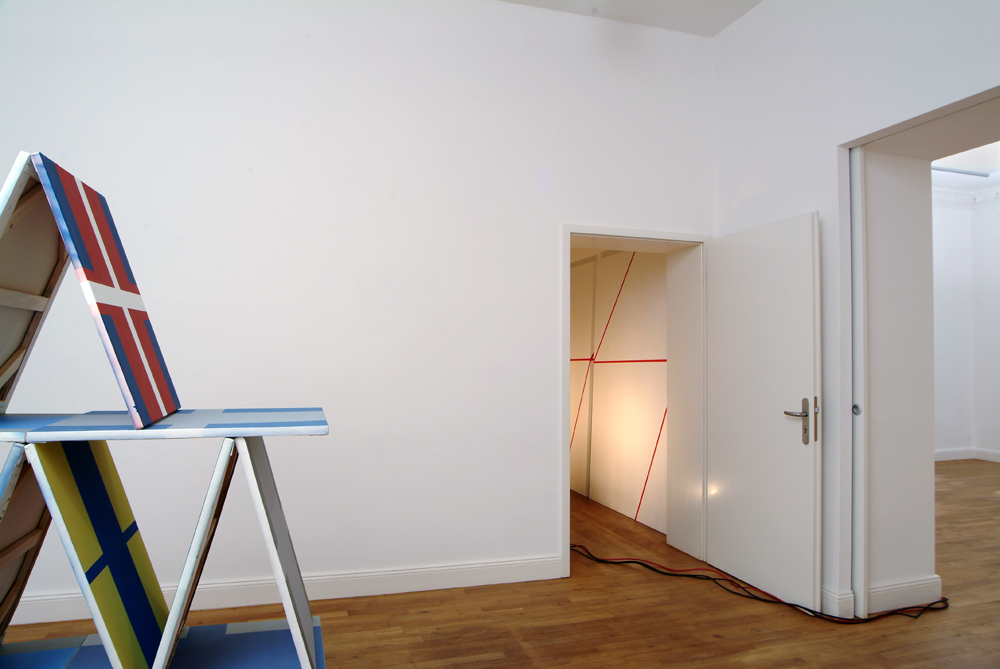 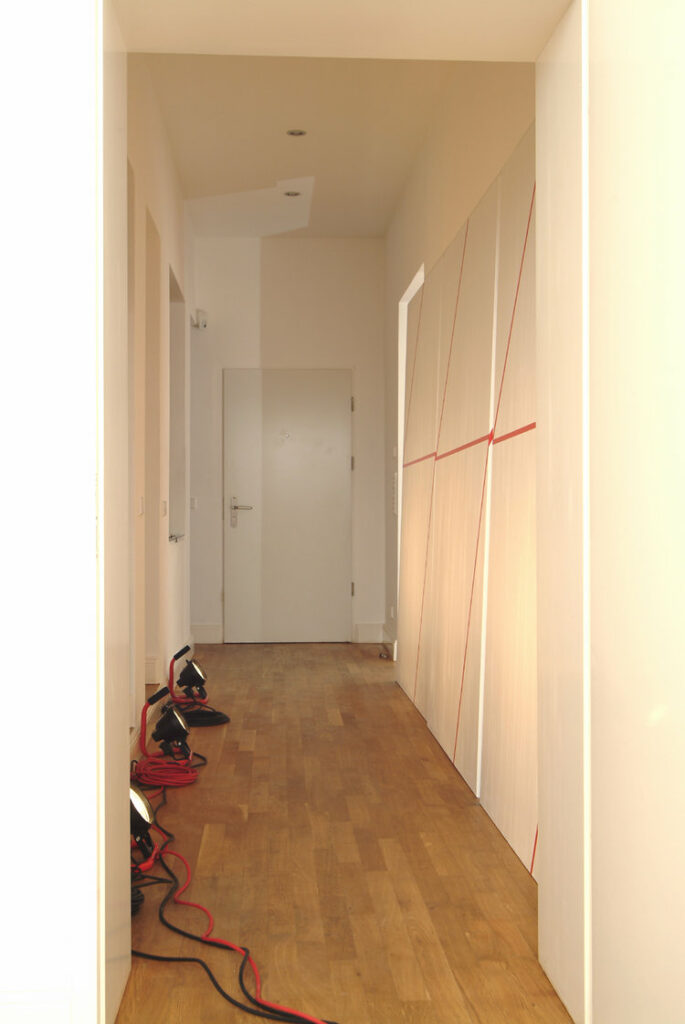