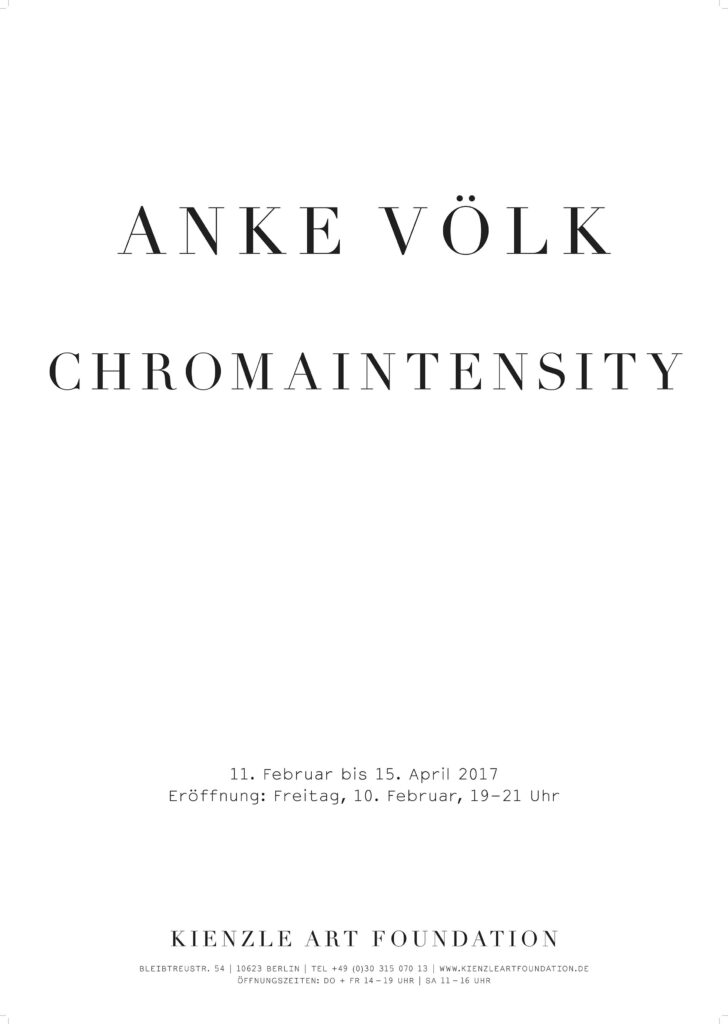 Formerly, people believed that a soul was inherent to all matter. Metals were assigned to moods, and colors were the matter of philosophical and religious disputes, expressing themselves in lapis-blue robes for the Virgin Mary, brown penitential garb, and the imperial purple privilege. In this universe, everything had its proper place until science began to tidy up. As a consequence, a relationship between light and color was established. The basis for all further research into the nature of colors was Sir Isaac Newton’s realization that “all colors in the world are brought about by light and not by our imagination… they are either colors of homogeneous light or composed of the latter.” Subsequently, chemistry, optics, and not least computer science brought about a spectrum wherein artificially generated hues sparkle on multi-colored grounds with the same power and effect as the times when colors were still precious and RAL numbers unknown.

Even now, the type of painting exists where the ghosts of potent colors may be inspected in a mirror, much like Perseus saw Medusa’s reflection in his bronze shield: They are Anke Völk’s new, space-penetrating installations entitled Chromaintensity, on view at the Kienzle Art Foundation. Only in her early years did the Berlin painter attempt to create pictures that corresponded directly to the world. At the time, she superimposed projections over and beside real drawings or paintings, whereas presently, she arranges shimmering papers on the canvases; their matte surfaces appear to be painted with wall color. These she mounts onto walls covered with fragmentary wallpaper-like surfaces that are composed of the same painted single sheets the autonomous pictures are made of. By selecting smart vistas and insights into neighboring spaces she adds to the visual impact, thereby integrating the existing architecture so naturally that the object status of the individual pictures gets lost within the dominant spatial impression.

Because of the way the elements of Chromaintensity float in blue-green-violet expanses, one is inclined to say that these works – as is frequently the case with contemporary, abstract painting, especially when applied directly to the wall – function like pure shapes or condensed color presences which one literally enters into instead of inspecting them from the exterior. When we go into the exhibition, we are indeed pulled into a chromatic frenzy. Colored and white planes and fields of the most diverse intensity and character are juxtaposed. Liquid and mercurial paints in cool nuances stand against dense red tones ranging from shock pink to brownish maroon, whereas in other places the chromatic effects of petrol-green are extemporized. Oddly enough, the spaces get seriously off-balance at exactly the moment the colors’ notorious urge is disrupted by the scratches, striations, and the brutal rifts on the otherwise homogenous sheets of paper. This is where the fragmentary nature of the wall pieces definitely assumes a process-like, almost narrative quality.

This might be inclined to interpret this as a conjurorial trick in order to somehow come to grips with the key question vis-à-vis modern art and what is usually almost its exclusive issue: How do gaze and image come together in the real space considering such extreme factors as perceptual psychology, conditions tied to producing painting, like laws of colors, problems dealing with plane and space issues, philosophy, social conventions, or the overpowering art history? In short: How is it possible to still act in the abstract field today when each picture is related to all others?

Völk’s answer is a luminescent-atmospheric space for experiences that establishes a relationship between the material and the immaterial. In it, the artist returns the color to its initial ingredients, namely light and underground from whence light is reflected. The result of analyzing the colors’ dynamic potential are surfaces with a metallic shine possessing the lucid quality of water. The mercurial, potentially space-penetrating quality of the colored sheets of paper that are directly attached to the wall is only kept at bay through their unfinished character. The rigorous frame construction of the canvases appears as a picture within a picture, pointing out additional formal boundaries so that the cool color fields in the background lose none of their severity.

We are reminded of similar ideas formulated in the 1960s, when the Zero-artists Piene, Mack, and Uecker staged a coup to enter documenta, where they erected their light space. “The light accounts for the power and the magic of the picture, its prosperity, its eloquence, its sensuality, its beauty”, postulated Otto Piene back then emphatically. Meantime his studio neighbor, Heinz Mack, strove to replace composition in pictures with structure zones in whose colors dynamic color modulations were supposed to vibrate. In actual fact, he speedily pulled a rubber squeegee across the freshly applied, acrylic-resin-coated paint, thus removing some of it from the surface.

Völk treats the paper from which she composes her wall pieces much like Mack, except that their iridescent colors are – compared to his unwieldy black-and-white paintings – infinitely more captivating. In a few broad gestures, she pulls liquid metallic pigments across rows of paper with an extra broad paintbrush and then removes some paint in selected areas before she lets it dry. Later, she will select from the sheets what qualifies to be worked on further.

One might refer to this work process as a random experiment set in extensive painterly experience. A process that hence can not only be mastered, but also directed. The slightly older sculptures in the Kienzle Art Foundation’s Cabinet confirm this view. They are the result of a respective stochastic game. The first specimen came about haphazardly when attempting to dry an extra large color-soaked sheet of paper. The artist refined her technique and created a group of these lizard-colored mounds of pleats which bore a remarkable resemblance to the incorporeal 15th-century pleurants. All of Anke Völk’s works do in fact retain a trifle of the essential, complex concepts of pre-modern images, wherein pictorial and real space blend into one another, enabling associations and contradictions to flourish. At times, this comes about metaphorically, like in the notorious urge of the wall constellations, constituting themselves in varied spheres by virtue of successively establishing color worlds. At times, it also occurs literally, as evidenced in the four matte aluminum pictures – mounted like shadow creatures amongst all those light entities – where the picture planes unfold dangerously from the wall into the space.

Ultimately, it makes no difference whether this painting manifests itself site-specifically within the architecture or autonomously on paper, canvas, or aluminum; its distinguishing core is its sense for the emotional possibilities of colors and abstract shapes, which cannot be accounted for but must be experienced in all its immediate intensity. 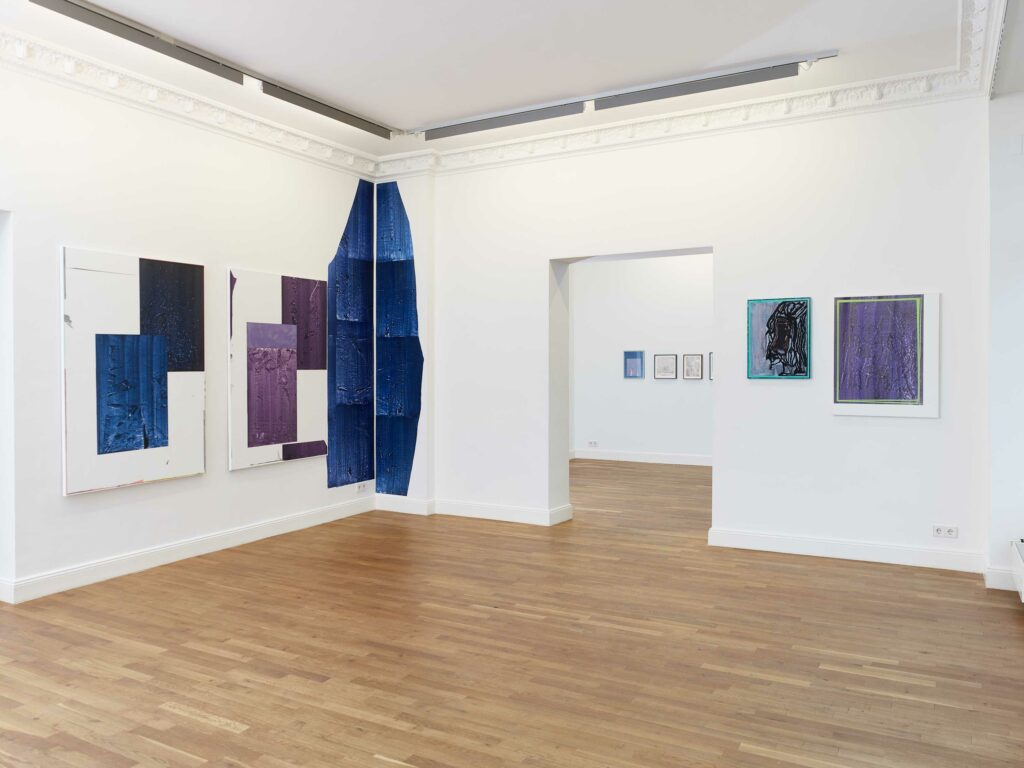 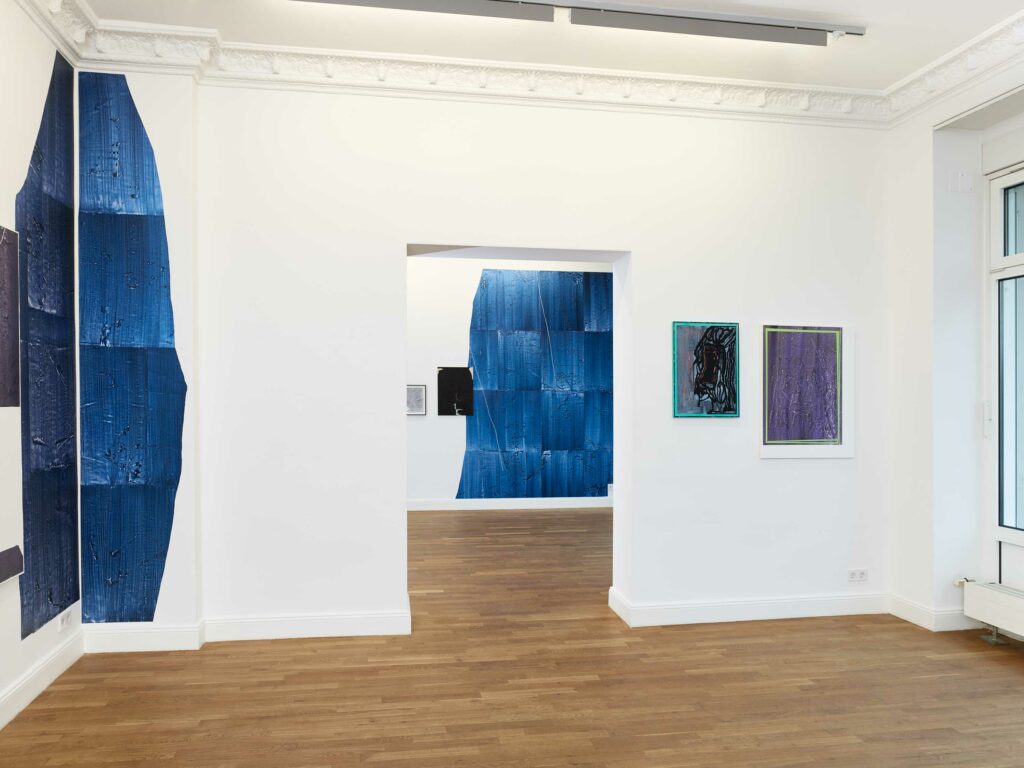 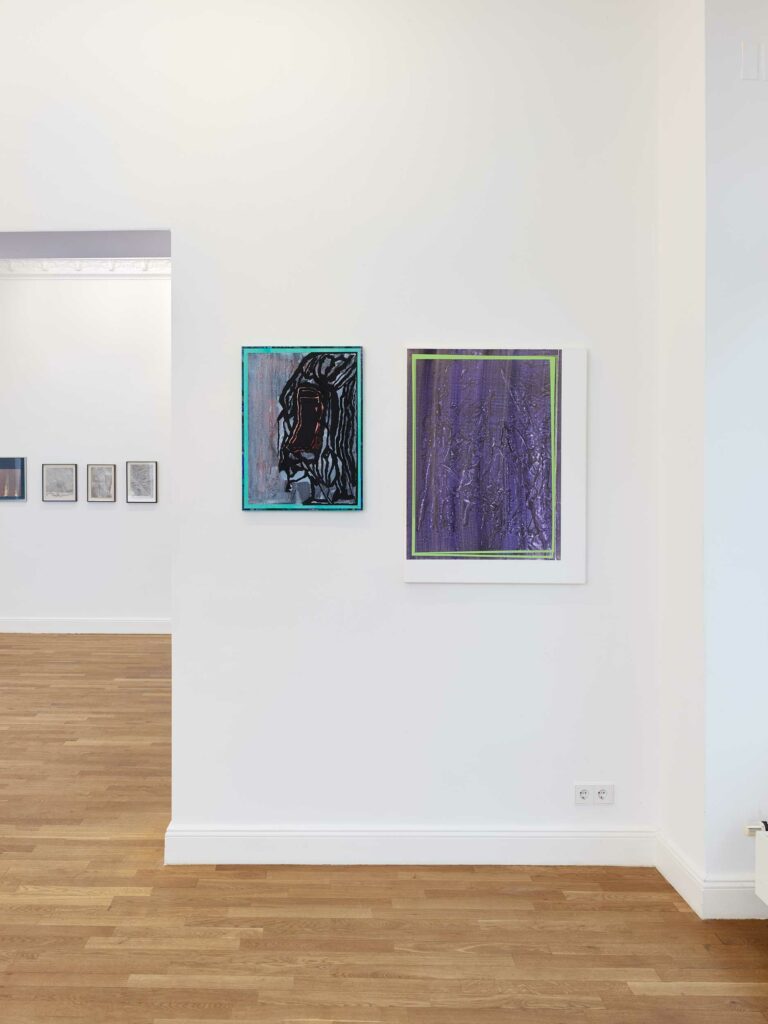 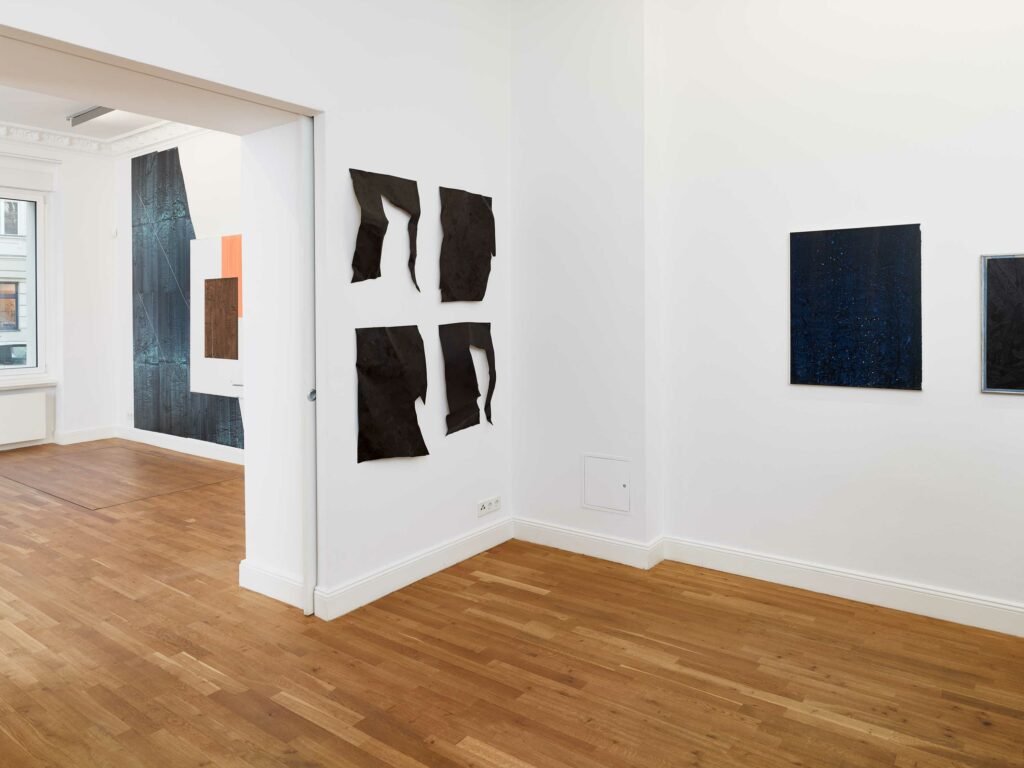 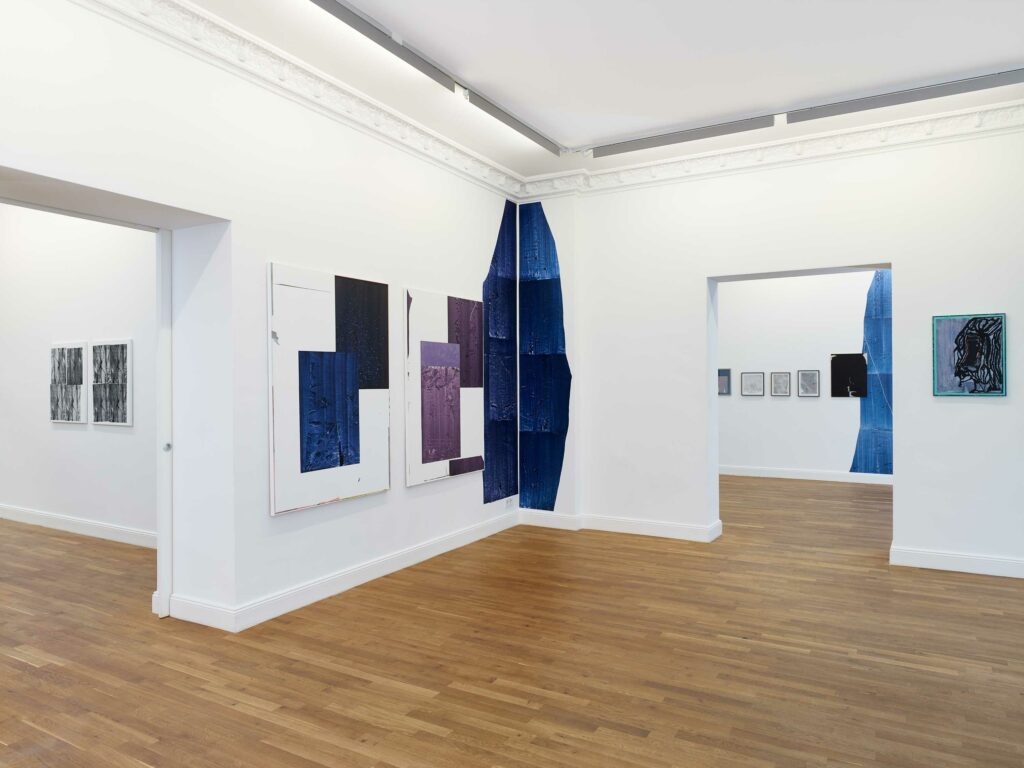 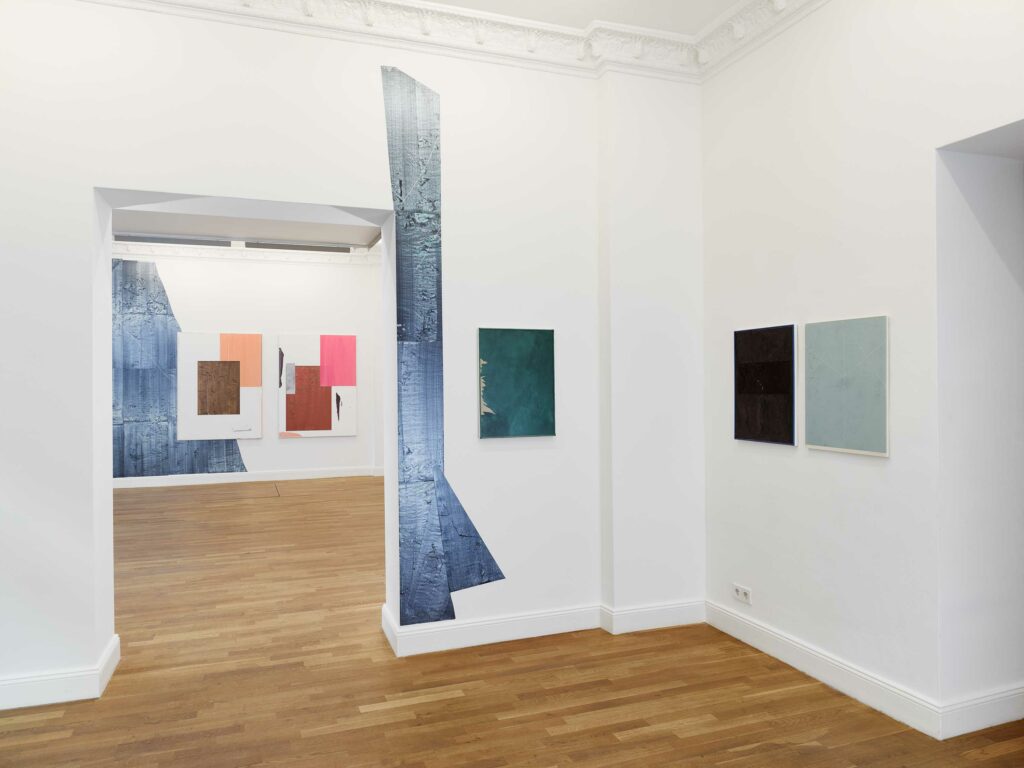 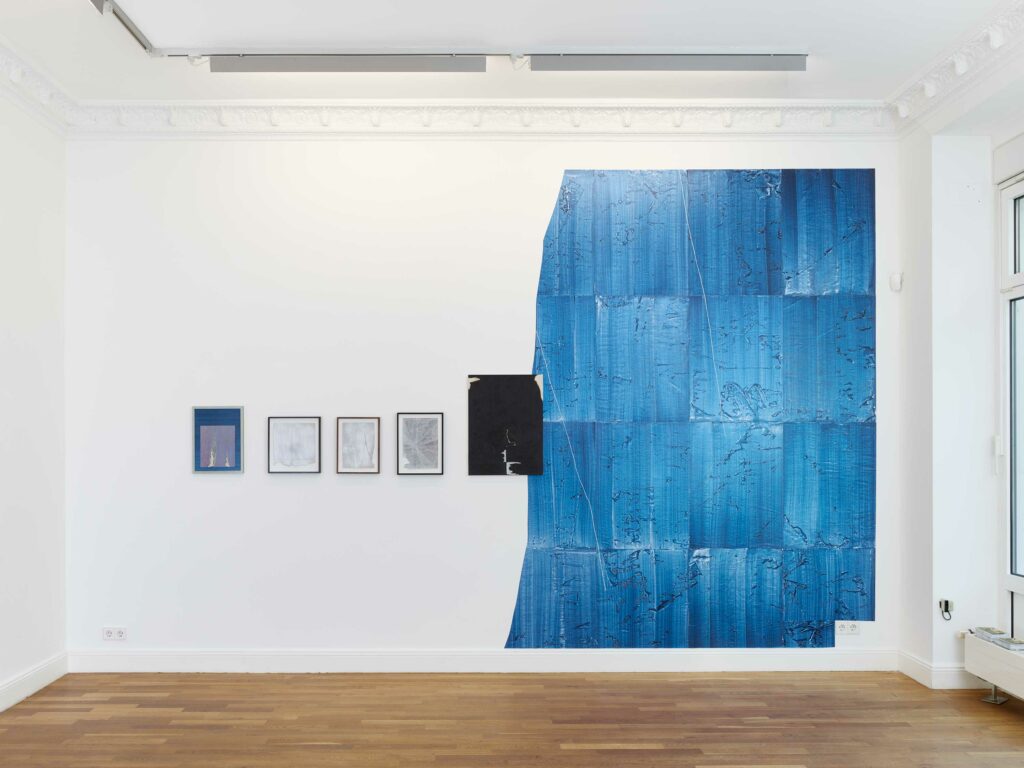 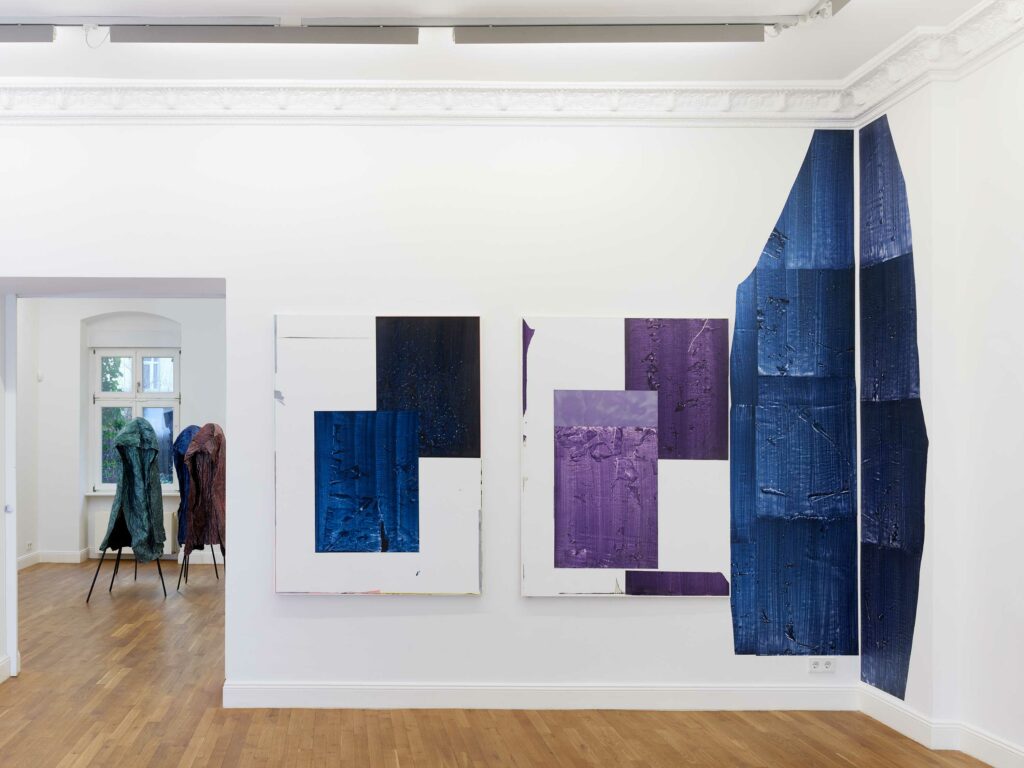 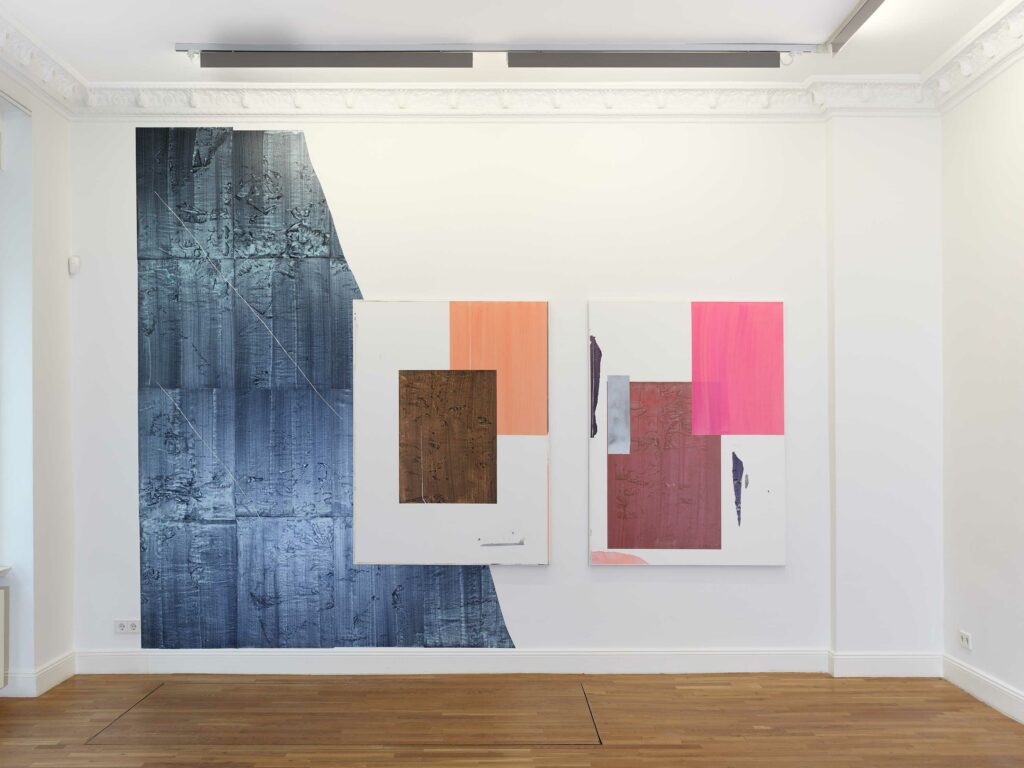 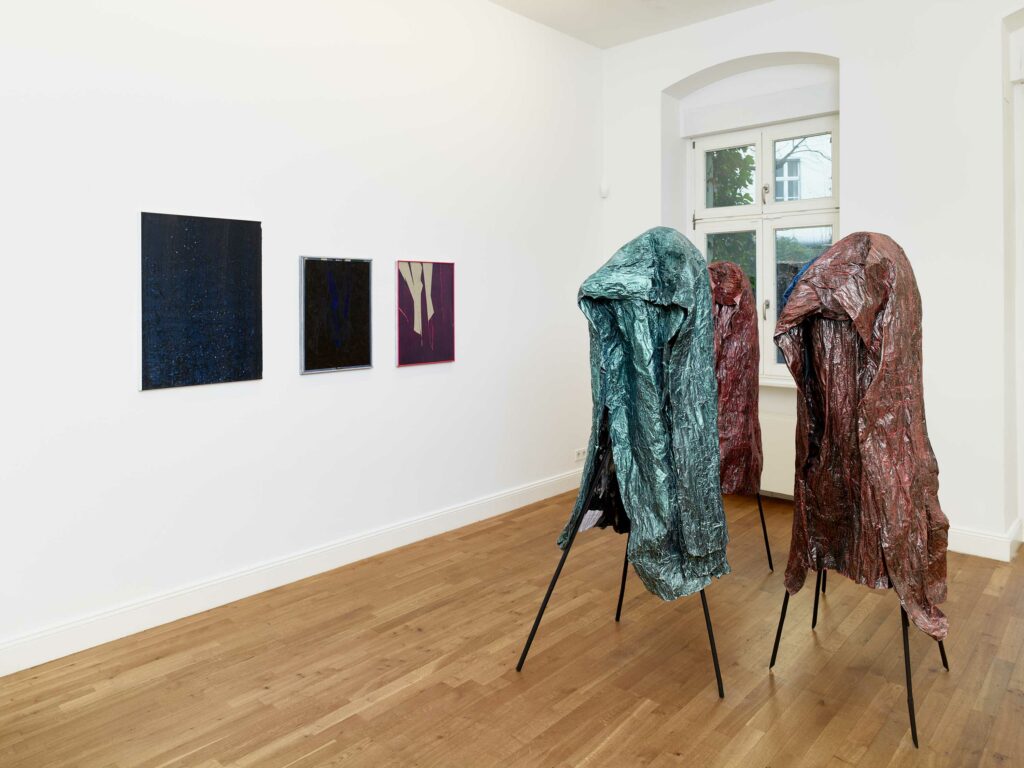